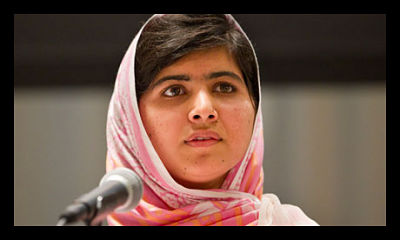 Malala Yousafzai, a Pakistani teenager shot by the Taliban after advocating for girls’ right to education, addressed the United Nations on her 16th birthday, speaking about the power of education to overcome extremism. The U.N. declared July 12 “Malala Day” to honor Yousafzai, who went back to school in March after recovering from the October attack.

According to a report released by UNESCO and Save the Children, 95 percent of the 28.5 million children who are not receiving a primary education live in low and lower-middle income countries, and girls make up 55 percent of those who are not in school. The report also stated that there were more than 3,600 documented attacks on education similar to that faced by Yousafzai. Listed below are five of her most inspiring “Malala quotes”, which highlight the influence and importance of education.