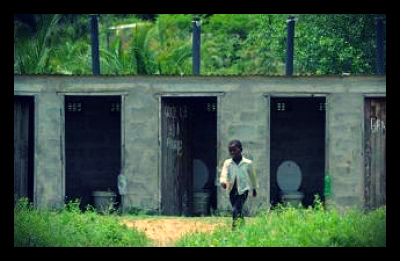 The small town of Kyuzhi in Nigeria is now giving fines to those who do not use toilets and defecate in the open, all of which is part of a water protection initiative to stop the dangers of human waste in small communities. Locals, furthermore, have the opportunity to take toilet education workshops where they learn the dangers of exposed human waste.

According to UNICEF, over 45 million Nigerians defecate in the open, an action stated as being the primary cause of high infant mortality in the country. When children are undernourished, diseases such as cholera or even parasitic infections can become deadly.

It has been over a year since members of the Kyuzhi community began to understand the problem with open defecation. By coming together and following a plan to improve community hygiene, an environmental task team was formed. They now fine 2,000 Naira or $13, to those violating the agreement and since last year only 3 have been caught defecating in the open.

Workshops in the community, moreover, allow locals to see how human waste and disease are linked.

Community leaders, women and youth take participants to an open defecation site in the forest and explain how crucial it is to stop this behavior. Mothers are now teaching their children the proper way to go to the restroom and if they see other children in non-designated sites, they seek out and speak to the children’s mothers. Several agree that this is the best way to keep the community clean and though some remain emotional about this confrontation, they are now using toilets.

More toilets and defecation sites have been set up for the locals of Kyuzhi and in due time local diseases will diminish, setting up an exemplary model for other developing communities.