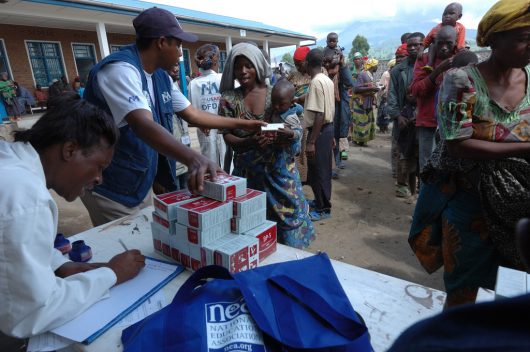 The World Food Program (WFP) High Energy Biscuit is pre-packaged and full of high-protein cereals, micronutrients and vegetable fat and requires zero preparation to be consumed. This food product extends to all groups suffering from hunger — women, children, infants, the elderly, those struggling with disease and communities in rural, underdeveloped regions, such as the Philippines, Kenya, North Korea and Afghanistan.

The biscuits serve as a lifesaving snack to survivors of natural disasters, conflicts and contain a multitude of healthy ingredients to keep individuals, especially children, strong and focused in school.

In 2014, WFP distributed its “biscuit-factory-in-a-box,” which, along with the WFP High Energy Biscuit, contains a variety of foods that are delivered to the world’s hungry. This includes fortified blends, or “mixtures of partially precooked and milled cereals, soya and beans that have been infused with micronutrients for additional health benefits.”

The primarily blended food produced by WFP is corn soya blend, cooked with water to create a warm, nourishing porridge. The blends not only provide protein supplements but also prevent and address nutritional deficiencies. Ready-To-Use Foods are also transported, typically to treat malnutrition among children between the ages of six months and five years old.

These products are easily accessible for poor families who lack access to running water or electricity, as they do not require heat or water to cook. The oil-based, low moisture consistency prevents bacterial contamination and gives them a long shelf life.

The successful impact of the WFP High Energy Biscuit and how much this program has grown since it was initially created has been documented over the years. Individuals who have benefited from the foods include more than 200,000 flood victims from Kenya, as well as 850,000 primary school children in North Korea, where the attendance rate has increased as a result of the incredible amount of aid offered to schools in the local area.

Most recently noted, the WFP High Energy Biscuit made its way to the people affected by the 2013 Typhoon Haiyan in the city of Tacloban. In the early days of the emergency response, the biscuits made a big difference and served as a light, convenient form of food aid. WFP has extended its operating locations, with one particular factory in Kabul, Afghanistan as the newest supplier for the WFP High Energy Biscuit.

WFP shows workers in new locations how to make the biscuits using local ingredients. This provides food for more people living in impoverished locations while stimulating the economies of these regions.