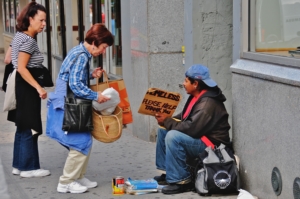 Homelessness is an issue that plagued Sweden for a long time. Well known for its national welfare system, the Swedish government provides a large safety net for its citizens to fall back on if they ever fall ill or lose their job. The Swedish government provides universal healthcare, family support and financial support for the elderly and retired. All Swedes, regardless of need, could call upon the government to receive the benefits provided by the Swedish welfare system. However, this doesn’t mean that the Swedish welfare completely shelters its residents from homelessness. What is causing homelessness in Sweden? Who are the homeless people in the famous welfare state? What is being done to alleviate this issue?

Because numerous factors can cause homelessness, every country has a different definition of homelessness. In Sweden, a person is homeless if they are in:

This certainly is a broad definition to determine if someone is homeless. However, even with this broad definition, counting the exact number of homeless people in Sweden is a challenge. In Sweden’s 2011 survey, for example, there were 34,000 homeless people. Around 4,500 people were classed as being in an acute situation, which means that they were on the streets or in homeless shelters. However, some homeless organizations estimate that the total number could be higher. Stockholms Stadsmission, a Swedish homeless charity, pointed out that the data only presented 370 E.U. migrants. The organization claims that the survey’s estimate of these E.U. migrants is too low.

People fall into homelessness in Sweden for multiple reasons such as breaking up with a significant other, escaping domestic abuse or suffering from mental illness. However, the lack of affordable housing seems to be one of the main causes of homelessness in Sweden. The housing prices in Sweden, especially in Stockholm, have increased homelessness significantly. Sweden’s steadily growing population, which reached 10,183,175 people in 2018, is definitely affecting the ever-rising housing price. While an industry expert suggests that Sweden is building more homes to meet the rising demand for housing, these housings are often not affordable due to the cost of materials, land and labor.

The ones who are most affected by this rising housing prices are the marginalized and vulnerable members of society. Furthermore, Sweden’s welfare system is attracting an increasing number of immigrants into the country, which puts a strain on the system.  While many migrants to Sweden are financially stable, there are groups of migrants who are not as fortunate. There are marginalized groups of E.U. migrants who fall into homelessness in Sweden.

Amnesty International’s 2018 report on the Romani population in Sweden found that there is a sizable population of Romani and other E.U migrants who are suffering from homelessness in Sweden. Romani, in particular, are marginalized more than other races in the entirety of Europe. In Sweden, the report suggests that many Romani people suffer from prejudice and lack of access to basic amenities such as water, shelter and healthcare. Lacking heated shelter, for example, is dangerous for the homeless since night temperature in Sweden usually falls below freezing. One homeless man described in an interview for the report that he had to wander around the streets to keep himself from freezing to death after being kicked out of a bus station at 2 am.

Measures Being Taken to Help

Some people aim to alleviate homelessness in Sweden. The Swedish government, for its part, is taking measures to alleviate the current issue. Stockholms Stadmission, for example, opened the first food bank in Stockholm. Human rights activists in Sweden are also calling for multiple reforms to alleviate the homelessness in Sweden. Since the highest cost of land, workers and materials to build new housing is negatively affecting the lives of the homeless in Sweden, human rights activists are calling for rental, tax and land reforms. Swedish politicians are responding to this call. Recently, the Swedish government introduced measures to encourage housing turnovers and subsidies to encourage the construction of more affordable housing.

Homelessness in Sweden is a complicated issue. The rising demand and price of housing are putting pressure on Sweden’s steadily increasing population. While Sweden’s broad definition of a person’s homelessness might broaden the number of people who can receive assistance, the task of counting the exact number of homeless people in Sweden is still challenging. Many EU migrants, the Romani people in particular, still face the danger that homelessness in Sweden brings. The Swedish government and charity organizations are taking measures to address this issue both on the local and governmental levels. While a long road still lies ahead for the homeless of Sweden, many hope that a better life is coming for them.