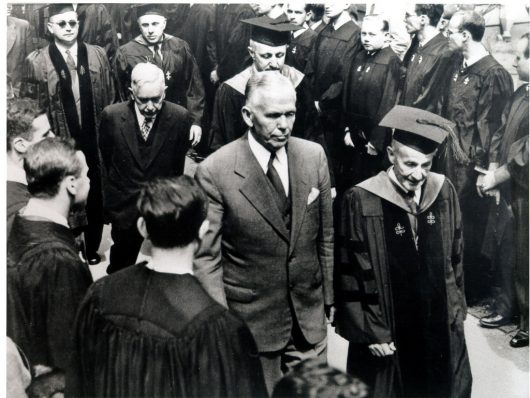 The battles from World War II resulted in some of the worst devastation in history, as military and civilian areas alike were targeted in aerial bombardment, which left millions dead and entire cities reduced to rubble. Devastation and breakdown of social fiber were so prevalent in Europe that the basic building block of civilization — the trade between farmers and urban dwellers offering food for goods and services — began to break down.

George C. Marshall, serving as the newly appointed secretary of state in 1947, outlined a plan to aid Europe with funds for rebuilding key infrastructure and industry. Though it has been criticized for reforming European markets in the style of the U.S. economy, the Marshall Plan undoubtedly helped spur economic recovery in Europe devastated by one of the most destructive wars in history.

The U.S. spent over $13 billion for the economic recovery of Europe between 1948 and 1951. In 2016 dollars the equivalent would be almost $130 billion. By helping to rebuild Europe, the U.S. found a new market for its manufactured goods that helped the country from sliding back into depression following the war. Today, the plan still holds lessons for combating poverty in the 21st Century.

Any approach to aid that doesn’t take the economic situation into account is doomed to short term success. The Marshall Plan made a point of focusing on rebuilding the economies of Europe including “…promoting industrial and agricultural production with the object of becoming independent of outside assistance…include(ing) projects for increased production of coal, steel, transportation facilities, and food.”

The provisions of the Marshall Plan created a new organization, the Economic Cooperation Administration, consisting of an administrator, a deputy and a staff composed of economists, accountants, lawyers and administrative workers. The Act empowered the administrator to create rules and regulations regarding the distribution of aid based on ground conditions. The administrator was on equal footing with the secretary of state, which the president of the U.S. set as the arbitrator in any disputes between them. Other rules outlined two advisory boards and a special “roving ambassador” to aid the administrator. The plan even established a congressional “watchdog committee” for additional governmental oversight. These clearly defined duties helped to ensure the aid outlined in the plan made it to refugees who needed it most.

Confidence Must Be Restored in Local Economies

The Marshall Plan took measures to restore vital infrastructure and public schooling, which helped to give ordinary citizens the semblance of order necessary to build consumer confidence in their economies. Provisions in the plan also provided for “taking necessary financial and monetary measures to stabilize currency and exchange and balance the governmental budget of the signatory country.” The end goal of the stabilizing effects was to create a favorable environment for American investment in Europe.

Aid Should Be Focused Regionally, Not on Single Countries

Experts believe one of the greatest reasons for the success of the Marshall Plan was that it focused on rehabilitating an entire region as an economic unit rather than singling out specific countries. Aid efforts crossed borders and gave a sense that the continent was in the fight together to return to previous levels of economic development. Under the Marshall Plan, assistance was available to countries in the Western Hemisphere. The agreement tasked the U.S. secretary of state with negotiating the free entry of supplies to countries participating in the plan. The administrator was still able to refuse aid in the interest of national security in case it had become clear supplies were supporting military forces. Under this provision, countries in Eastern Europe falling under the Soviet bloc did not receive aid.

Aid Should Be Coordinated Through the UN

Aid through the Marshall Plan filtered through U.N. organizations for distribution. Also, the rules of the plan required the administrator to send progress reports to the international organization. By coordinating efforts through the U.N., the U.S. increased the legitimacy of its aid programs and allowed some measure of input from U.N. officials.

Marshall himself outlined the reasoning behind the aid in a speech at Harvard University on June 5, 1947. In the address he stated, “It is logical that the U.S. should do whatever it is able to do to assist in the return of normal economic health in the world, without which there can be no political stability and no assured peace. Our policy is directed not against any country or doctrine but against hunger, poverty, desperation, and chaos.”