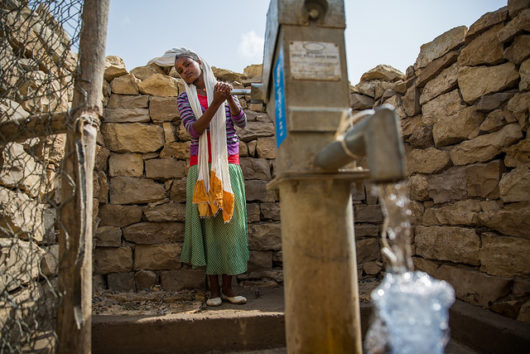 The 2015-2016 El Nino climate pattern was one of the most extreme occurrences in years, affecting almost 60 million people, more than half of whom live in Africa. The effects of El Nino created extreme weather changes, ranging from severe drought to severe flooding. These changes posed drastic problems for the population. Drought caused food insecurity and poverty due to crop failure, and flooding created problems with sanitation and increased the spread of water-borne and communicable diseases. Furthermore, flooding threatened infrastructure and housing. The damage also restricted access to healthcare facilities, preventing victims from receiving the help they need.

The Effects of El Nino on Africa

In Southern Africa, El Nino-related droughts had led to massive crop failure. South Africa had a 25 percent drop in maize and a 23 percent drop in grain production. Maize prices were the highest they had ever been following the drop. The drought aggravated the existing food insecurity, with 14 million people already hungry and as crop failure continued, the number of people at risk of hunger increased.

Most El Nino effects are related to soil dryness or reduced rainfall, but in 2016, this occurrence resulted in a massive drought. In Cambodia, 2.5 million people were left without access to clean water. People had to travel long distances in search of clean and drinkable water after the wells and ponds had dried up. In South Africa, parts of Mozambique, Zimbabwe, Zambia and Namibia, these effects of El Nino are still posing problems. In past years, most food production decreases have corresponded to El Nino, regardless of its magnitude.

The Effects of El Nino on South-East Asia

South-East Asia faced droughts and below-average rainfall as well. Thailand had faced its most severe drought in 20 years during the 2015-2016 El Nino. Water levels in dams throughout the country fell below 10 percent, leading to Thailand pumping water from nearby rivers. The Mae Jok Luang Reservoir, for example, typically served 11 sectors and can now, as a result of El Nino, can only serve one.

The droughts hit farmers hard, causing mass crop failure. Rice production and exports especially had gone down in Thailand. Consequently, many farmers found themselves in debt and unable to pay back loans. To deal with financial stress, many Filipino farmers started sending their children into town to work instead of going to school. Indigenous farmers turned to odd jobs as well, giving up on trying to farm in the drought.

The Effects of El Nino on Latin America

Effects of El Nino on Latin America often vary, and in 2016, there were droughts in Colombia, Venezuela, Mexico, Central America as well as floods in Argentina and parts of Peru and Chile. Areas like Brazil had an increase in wildfires and tropical storms as a result of El Nino. Similar to South-East Asia, farming and fishing industries faced decreased production and exports during El Nino.

This was not the first time that El Nino has harmed the health and population of South American fisheries. The 1972 El Nino played a major role in the collapse of the Peruvian fishery, the largest fishery in the world at the time. With less fish, the population of seabirds also decreased, which damaged the seabird-dependent fertilizer industry. The impact on agricultural production led to higher food prices and lower food availability.

As a result of El Nino, 2.3 million people in Central America needed food assistance in 2015-16. The weather conditions also posed a great threat to civilians. Peru declared a state of emergency in 14 provinces where the lives of two million people had been at risk of mudslides and flooding. In October 2015, 500 people in Guatemala City died because of widespread mudslides.

Fortunately, there are organizations working to combat the effects of El Nino. Care, a nongovernmental organization, for example, has distributed food and emergency supplies to drought-ridden countries. In Cambodia, Care distributed water tanks and filters to the most affected areas. They had continued aid well into 2017.

While the work of organizations like Care is valuable, long-term plans to combat general climate change is necessary for countries to prepare for future climate change events. The results and effects of global warming and weather changes can be felt throughout the whole world, and the countries that suffer the most are usually less developed ones that do not have the right tools to combat this issue. People need to start taking climate issues seriously before it becomes too late to recover from these effects.

Hunger and Whale Hunting in Japan: What’s Tradition Got to Do With It... Top 10 Facts About Living Conditions in Romania
Scroll to top