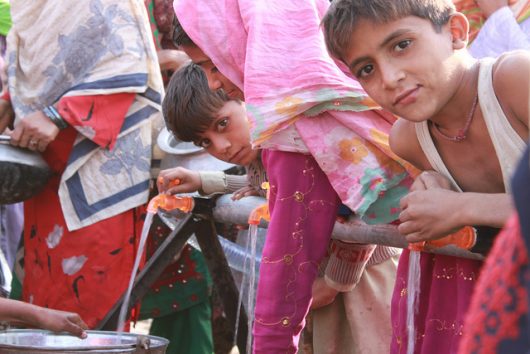 Safe water is essential to the survival of people across the world. Clean water is crucial — not only for drinking but cooking, washing and bathing as well. For these reasons, it is particularly essential for developing countries to have access to clean water.

The Pakistan Council of Research in Water Resources published its final report in 2007 on national water quality in Pakistan. The study examined the condition of 357 water samples from 23 major cities and 22 bodies of water. Water samples in every major city evaluated were declared unsafe.

Drinking contaminated water can result in numerous diseases including diarrhea, bacterial dysentery, cholera and typhoid. According to the World Health Organization (WHO), between 25 and 30 percent of all hospital admissions in Pakistan are related to waterborne bacteria and parasitic conditions.

It is estimated that 250,000 Pakistani children under the age of five die every year due to waterborne diseases. Diarrhea is the second highest cause of death among children ages 1 month to 5 years.

Poor water quality in Pakistan is primarily due to population growth, urbanization and political instability. Due to these challenges, Pakistan has experienced critical water shortages, droughts and flooding which have been steadily decreasing agricultural production.

However, international non-profit organizations like WaterAid are working to transform the lives of Pakistanis by providing them with access to safe water, sanitation and hygiene. Water quality in Pakistan has improved greatly within the past 10 years of WaterAid’s involvement in the country.

A few of the WaterAid projects in Pakistan include:

Between 2015 and 2016 alone, WaterAid reached 230,000 people in Pakistan with safe water and over 520,000 people with improved sanitation. According to the World Bank, the population of rural Pakistanis with access to improved water sources has increased to 90 percent.

Water quality in Pakistan is improving due to the efforts of organizations like WaterAid. WaterAid’s focus on innovative approaches, water monitoring and sustainability has saved the lives of thousands of Pakistanis.