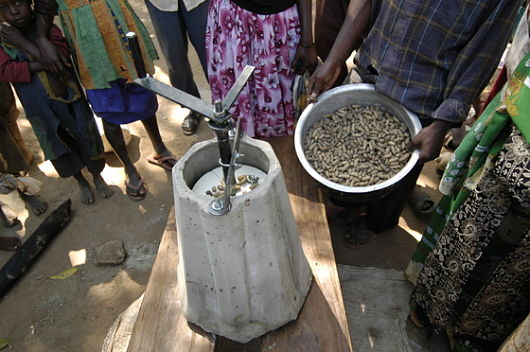 It turns out that one man’s trash may actually be able to be used to create his own treasure.

While on a mission to create an agricultural tool for villagers in West Africa, social entrepreneur Jock Brandis discovered that utilizing locally available material scraps could be the answer to affordable, sustainable development in impoverished nations.

It all started with the radical development of a peanut sheller.

Peanuts are seen throughout Western Africa as a solution to problems of malnutrition, as they provide ample protein. While they are planted heavily in the region, it takes a lot of work to shell these nuts. During a visit to Mali in the early 2000’s, Brandis noticed villagers spending all day shelling peanuts, doing tedious work that kept them sore and made their fingers bleed. While he promised the village women that he would send them a sheller, he realized upon his return to the United States that small-scale nut shellers had never been successfully created.

Rather than evading the issue, Brandis addressed it by developing his own Universal Nut Sheller for use in small villages in developing countries. According to VICE, Brandis adapted a Bulgarian design to be able to use scraps and local materials to create shellers so the design could be manufactured at a local level. There are several versions of the sheller in use in dozens of countries around the world.

Farmers can buy the sheller design for $28, which includes instructions and concrete molds for simple manufacturing. Local developers supervise construction, ensuring that the products are being created in the way that is best for the specific village. Bradis’s model depends on strong relationships with the locals to distribute and vary the design based on community-articulated needs.

Brandis’s sheller gets seven hours of work done in less than half an hour. The sheller allows villagers to shell mass amounts of peanuts at once, saving ample time and energy for workers. This transforms members of the village who used to spend their days shelling peanuts into business people, saving them time and money while also providing nutritional benefits to the surrounding area.

The ability to shell peanuts at the appropriate time to keep them fresh also allows them to market their crops more appropriately, which helps them each generate more revenue in the long run. Such help brings subsistence farmers from living day-by-day based on their jobs shelling to having the potential for economic prosperity. As quoted by NPR, Professor Rick Brandenburg said says “the price can double if you can get them to the market at the right time. It allows them to market their crop when the price is right.”

Brandis says he has seen the sheller raise the incomes and the quality of life of many villagers. A study at the University of North Carolina in Chapel Hill showed that village income rose up to 20 percent after introduction of the sheller.

The development philosophy spurred the creation of The Full Belly Project, which designs various agricultural technology improvements and gives instructions on how to use locally available materials and scraps to make these inventions function to help the villagers improve their situations. The nonprofit organization strives to use innovative and simple agricultural technology to help impoverished people expand their economic possibilities. It works to provide small villagers the tools to go beyond meeting basic needs and instead go on to sell their goods to others and eventually create economic prosperity for themselves.

The Full Belly Project has various ongoing projects to promote similar styles of development. The nonprofit organization has developed technology to transform garbage into building material and solar water pumps. It is also working on technology to repurpose cleaning waste from luxury hotels into new bars of soap for small villagers using its cold-soap press.

The organization has a long-term goal of using this philosophy to revolutionize the way development occurs in impoverished communities. By facilitating local manufacturing and distribution, Brandis hopes that the Full Belly Project changes the way of international development work.