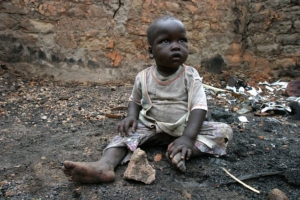 Zimbabwe has become a country of international focus since UNICEF, the United Nations World Food Program (WFP) and the Zimbabwean government have been working together to feed starving people in the nation. The Food Security, Health and Nutrition Project has bloomed from that collaboration and poses a solution to undernourishment in susceptible areas in Zimbabwe.

UNICEF is a charitable organization that people know for its accomplishments in improving living conditions for the world’s impoverished. About 190 countries have benefitted from UNICEF programs, giving millions of children the chance to live, thrive and achieve. The organization has most recently shifted its focus to hunger in Zimbabwe in response to the increasing rates of global hunger in 2016.

Malnutrition and its consequences are central concerns for policymakers in Zimbabwe. Nearly 650,000 children under 5 years old, or 27 percent, suffer from chronic malnutrition. UNICEF considers this statistic high compared to the rates in other nearby countries, which range from 19 to 31 percent. Children living in urban areas are more likely to suffer malnutrition than those in rural settings because preserving a healthy diet is harder to do.

Natural disasters and disease that plague cultivated areas in Zimbabwe have also inflated the rate of malnutrition. About 92 percent of Zimbabweans living in rural households rely on agriculture as the primary source of food and income. Drought, floods and livestock death all weaken the environment that produces healthful resources.

What is The Food Security, Health and Nutrition Project?

The Food Security, Health and Nutrition Project emerged in March 2019 as a means of solving undernourishment in Zimbabwe. Estimates determine that the initiative benefits nearly 130,000 individuals living in 11 regions of the country.

The program’s formula focuses on building a resilient environment that will remain productive throughout common hardships that eradicate food supply. Droughts and floods result in insufficient water flow, and as such, the project plans to forge weir dams and nutrition gardens that will allow crops to flourish in disastrous circumstances.

In addition, this project identifies women and children as particularly vulnerable groups. The program is providing financial and nutritional support to pregnant women living in maternity waiting homes throughout the country. This aid aims to ensure that mothers can provide a nutritious diet for their children, and thus, mitigate the prevalence of malnutrition in Zimbabwe.

Most recently, Japan demonstrated support for the Food Security, Health and Nutrition Project. In 2018, the Japanese government donated $1 million to the initiative. The country’s funds will go towards crafting infrastructure to preserve water supply in flood-affected and drought-affected communities across Zimbabwe.

Japan’s lofty donation is just one way in which the country has positively contributed to third world development. In 2015, Japan provided $1.5 million for developing irrigation and harvesting systems in rural communities in Zimbabwe. There were more than 9,300 beneficiaries of this new framework. Japan also focuses on instilling a sentiment of independence, as it advocates for the human security necessary for individuals to shine.

While Japan has established a particular passion for curing hunger in Zimbabwe, the country requires more international help to solve undernourishment. In 2018, UNICEF found that nearly 821 million individuals are suffering from an insufficient food supply. The Food Security, Health and Nutrition Project is just one example of an effort to assuage this recorded hunger. A fitted policy that addresses the country’s specific issues is an efficient way to provide relief and development.