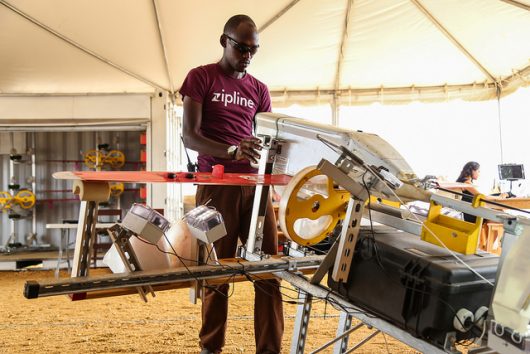 The California-based company Zipline, which designs and operates drone delivery networks, will start delivering medical tools and vaccines via drones to Tanzanian clinics in 2018.

The East African country has 0.03 doctors per 1,000 people and 5,640 public health facilities for a population of over 56 million. Blood transfusions and treatments for deadly diseases like HIV are hard to come by. In 2014, the CEO of Zipline drones, Keller Rinaudo, noticed this harsh reality as he browsed a database of health emergencies. The database would collect real-time data about patients who were suffering in different regions of the country, but people would not receive aid based on this information. Rinaudo, as he states in an interview with NPR, imagined “the other half of that system — where you know a patient is having a medical emergency and can immediately send the product needed to save that person’s life.”

The ‘other half of this system’ will start in January 2018, as per a statement from the Tanzanian government. Drones will be used for on-demand delivery of vaccines, blood transfusion materials and other medication or medical tools.

A drone medical delivery system is already up and running in Rwanda, with overwhelmingly positive results and stories. Tanzania hopes for an even larger system, where 120 drones will make 2,000 deliveries a day from four distribution centers spread across the country.

Zipline has hired locals to operate both the drones and distribution centers. When a hospital or clinic requests an item, a worker will stock the products into a shoebox-like container and pack the drone, which would zip to the hospital and deliver the products by parachute. This process takes what could be an eight-hour process and cuts it down to under a half hour.

The medical future is bright for rural and impoverished communities like those in Tanzania with the help of drones. Studies have found that blood samples and lab results were safely transported between medical facilities without any change in result, except for the time they took to be transported.

Rinaudo sees the system as a win not only for his Zipline drones company, Rwanda, or Tanzania, but for medical communities across the globe. In the same interview with NPR, he says that operation teams are “phenomenally smart, ambitious and driven. They work 12 hours a day, seven days a week. They will do anything to save human lives…Rwanda showed what’s possible when you make a national commitment to expand healthcare access with drones.”