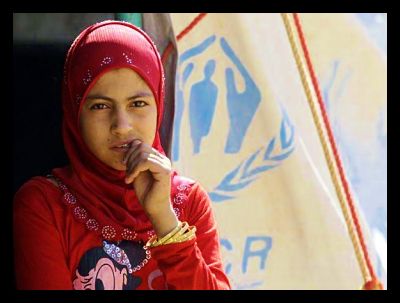 The Zaatari refugee camp near the border of Jordan and Syria has become Jordan’s fourth largest city as people flee from the violence of Syria’s ongoing civil war. The war, which has killed more than 70,000 people, is entering its third year and has displaced more than 3 million Syrians. Zaatari refugee camp is now the second biggest refugee camp in the world and is home to roughly 200,000 people. The camp has taken in about 1,500 people each day, but Jordanian officials worry that a continuous influx of people will put even more of a strain on their already shaky economy. The Jordanian Foreign Ministry estimates that one million Syrians have taken refuge in Jordan over the course of the war, and Jordan’s population hovers at only 6 million people.

Though Zaatari provides refuge from the violence in Syria, it is hardly a safe location for its residents. 75 percent of them are women and children, and United Nations workers admit that women are frequently attacked at night. The camp does offer medical care and schooling to its occupants, but its resources are scarce and most go without these services. Zaatari is only equipped to school 5,000 children, so most go without an education.

The U.N. has less than 30 percent of the funding it needs to keep Zaatari and other nearby camps running, and Jordan may soon be forced to close its borders if the number of refugees reaches the U.N.’s projection of three million refugees in 2013 alone.

According to U.N. High Commissioner of Refugees Antonio Guterres, the Syrian war is a severe threat to national security in the Middle East that could have profound international implications. While the U.S. has contributed $385 million to help Syrian refugees, offering more financial support than any other country, Guterres stresses that the U.S. and other powerful countries must contribute more if they wish to avoid one of the biggest humanitarian and national security crises of our time.