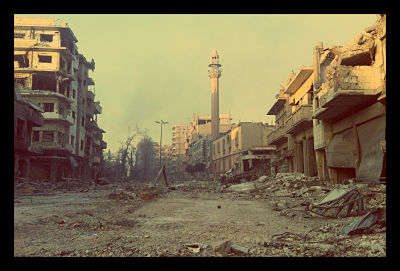 The Syrian peace talks in Switzerland at the start of 2014 have had little success. Members of the West insist on a transitory government away from the present Assad regime, yet that is a non-starter for negotiators from the regime. In the meantime, the Syrian people are still being killed, starved and stuck in the midst of battlefields. Relief organizations looking to bring in goods to the region have had repeated difficulties in doing so.

The one major development from the talks has been the agreement for a ceasefire at the city of Homs.

The city has been besieged for the greater part of the war, and while it is currently held by rebel groups, the people remaining in the city were still subject the whims of Assad’s forces.  The city had been under siege by Syrian Army troops for 600 days. This city where such horror has taken place was the one area where peace was actually achieved during the Switzerland peace talks.

During the week of evacuations, at least 1,400 Syrians were evacuated from the city.There were projected to be about 3,000 people in the city at the start of the conflict, with many women and children involved.

The effort was focused on getting those groups out of the city, yet some men aged between 16 years old and 54 years old were included as well.Issues arose around these men, who were detained and interviewed by the regime. Some were allowed to leave after declaring their allegiance to the Assad government, bu the evacuation was not extended in part due to the detainment of some.

Even with the ceasefire, there were reports of violence in the war-torn city. Belying the difficulties of administering relief during a time of war, some convoys were fired upon by unknown sources. The United Nations reported that 10 people were killed during the operation, though none were relief workers.

Despite the difficulties, a U.N. team leader said food supplies sustainable for 2,500 people for up to a month were delivered to the city.

The evacuation of Homs is an important first step for the Syrian peace talks, though it is not nearly enough for the international community to deserve praise.

The work that relief organizations did during the operation shows what can be achieved if these groups are given the chance. However, there is not enough work being done by governing bodies to give the people of Syria a fighting chance; it is up to advocacy groups to push governing bodies to do this work.

Despite obvious tensions on both sides, the soldiers on either side were operating in close proximity and there were no blows exchanged for the time of the evacuation. While fighting raged on in other parts of the embattled nation, in Homs there was at least peace for a week. This week showed that these two sides can at least peacefully coexist for a time, and hopefully is an example that could be used to better the situation of all Syrians soon.