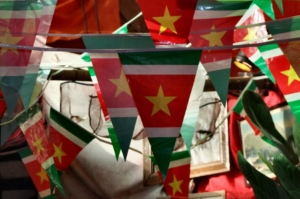 Suriname is among the many countries that COVID-19 has affected, specifically in its health care and political systems. The pandemic revealed the underbelly of Suriname’s existing health system. The country has since been guiding officials toward a more adequate system and the political climate in Suriname is changing. The election on May 25, 2020, brought in Chan Santokhi as the new president succeeding the decade-long leader, Desi Bouterse.

Desi Bouterse tightly held the reins in Suriname for years as an influential political force. Bouterse was a prominent figure in overthrowing the first leader of Suriname, Henck Arron, after the country’s independence. He was chairman of the National Military Council for a majority of the 80s and became president in 2010.

Bouterse has a significant history of controversial actions. In November 2019, Surinamese judges decided that Bouterse was guilty of murder and found him responsible for the death of 15 of his opponents in December 1982 because he commanded his soldiers to kill them. This long-standing trial started in 2007 when he stated that he had “political responsibility” but took no personal responsibility for what had happened. Although he received a 20-year sentence, the police did not issue any arrest warrants for Bouterse. He also denied allegations of smuggling more cocaine into the Netherlands, which the Dutch court convicted him of doing in 1999.

In 2020, Desi Bouterse saw the end of his long career. Chan Santokhi was victorious over Bouterse in the elections in May 2020. Mr. Santokhi was a former police chief who investigated the past president for his alleged murders in 1982. Although he has won the seat as leader, there are still many obstacles he must overcome after inheriting Bouterse’s Suriname. Suriname is battling a horrible financial crisis, political corruption and the coronavirus.

The new president has much to accomplish, but there may be hope for Suriname. Chan Santokhi may be able to overturn the economic crisis in Suriname by utilizing its newly found offshore oil by 2026.

COVID-19 is touching the lives of those in Suriname, and the virus is quickly exposing the deficiencies in its health care system. First, tropical rainforest covers most of the land and houses many Indigenous and marginalized populations. Those who live in these deeply remote areas are unable to receive essential health care.

Second, Suriname has an insufficient workforce in the health care sector at about eight physicians and 23 nurses per 10,000 people. It is also suffering from a lack of specialists who can work in ICUs.

Third, Suriname does not have a structured effective response plan in case of emergencies as the country is not susceptible to natural disasters except for the occasional flooding. With resources going toward COVID-19 treatment, Suriname is recognizing its lack of resources to provide other health services not pertaining to the virus.

Actions to Fight Against COVID-19

At the beginning of 2020, the country’s ministry of health took immediate action and gathered a public health response team to combat the virus. This team worked with the Pan American Health Organization (PAHO), World Health Organization (WHO) and Universal Health Coverage Partnership to bolster the health care system and provide effective plans for current and future disease outbreaks.

The organizations are also working to implement universal health coverage in Suriname. With the help of these organizations and international funding, Suriname is working to effectively save lives through a better health care system, a protected workforce, containment of COVID-19 and preparation for future epidemics. Suriname is changing and improving its current public health system for the present as well as the future.

Regardless of the brutalities many face due to COVID-19, it has also brought positive changes to the people of Suriname. The country was able to take down a controversial leader and new plans to improve its emergency response and public health system are in progress. Hopefully, with the turn of a new post-COVID-19 era, Suriname is changing for the better.