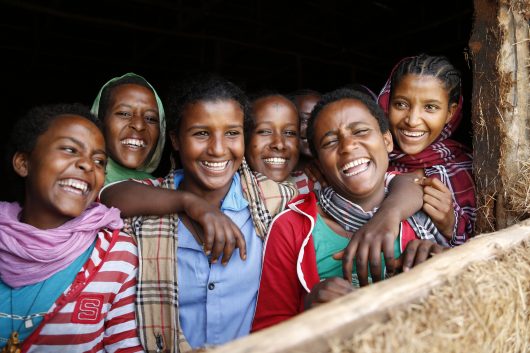 Education is what’s in fashion for the girls studying at Studio Samuel, a non-profit founded by New York designer, Tamara Horton. Located in Ethiopia, this organization aims to alleviate poverty and empower girls and women through training in a broad range of life skills.

According to the non-profit’s website, women in impoverished Ethiopia are living in severe health, education and career opportunity deficits. The organization notes the following:

In order to combat these obstacles to gender parity and poverty alleviation, Tamara Holton founded Studio Samuel in 2012. The goal was to teach young women life skills and instill self-esteem that can help create pathways out of poverty.

The centerpiece of Studio Samuel’s work is the Training for Tomorrow program, which offers a two-year curriculum for girls, ages nine to 18, that runs in parallel to their regular schooling. The instructors pull from materials vetted by United Nations-based agencies in order to best serve the students.

According to the World Health Organization, the “Ten Core Life Skills” for success include “the abilities for adaptive and positive behavior that enable individuals to deal effectively with the demands and challenges of everyday life.” The Training for Tomorrow program teaches these abilities as a way to help girls realize their potential and avoid falling back into cycles of poverty.

The classes include everything from computer programming, a valuable job skill in the 21st century, to self-defense, a skill which Studio Samuel sees as a confidence-builder in young girls.

When founder Tamara Horton isn’t working in Ethiopia, she is thriving as a fashion designer living in New York City. She owns a shop, designs costumes for Off-Broadway shows, and is a mother to her son, Niko Samuel, for whom her non-profit was named.

She came up with the idea for Studio Samuel when she first adopted Niko from Ethiopia. In an interview with the Huffington Post, Horton said that “[t]he seed was planted the first time [she] met [Niko]. I wanted to give back in some way and after seeing the struggles that poverty places on a family, particularly the girls, it was the place to start for me.”

The organization has seen enormous success since its founding. Approximately 94 percent of students in the Training for Tomorrow program saw improvement in their academics and/or behavior within six months of enrollment. In addition, there has been a 97 percent success rate in avoiding human trafficking and child marriage amongst students.

The philosophy behind theses achievement can be described by the adage “teach a man (or woman for that matter) to fish,”. Studio Samuel believes in an “empowerment without pity” model, one that imparts skills training to women and girls, instead of offering traditional forms of charity.

As Hilawi Alemayehu, the organization’s Country Director, said in an interview with The Huffington Post, “By creating together and not giving handouts, a foundation unfolds [that] may not have existed. It builds pride and accountability and once welcomed, it is extremely impactful.”

How GMOs Could Potentially End Poverty and Hunger in Africa Tuberculosis Policy and Practice in Africa: Bridging the Gap
Scroll to top