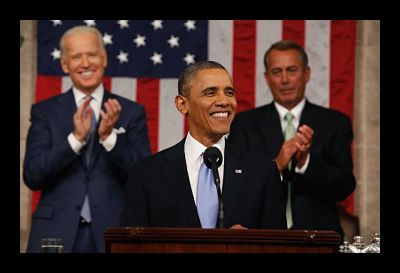 Social mobility in the U.S. played an extremely crucial role in President Barack Obama’s most recent State of the Union Address. He took the opportunity to comment on the furthering economic divide occuring between the lower middle and upper middle and upper classes in America.

“Will we accept an economy where only a few of us do spectacularly well,” the president asked, appealing to lower class Americans.

One of the stories he told pertained to a young couple who was negatively affected by the economic crisis of 2008. The story represents that of resilience and the couple was able to rebuild their lives.

In addition, Mr. Obama is sending a bill to Congress that would lower the cost of a community college education to zero. President Obama said that the measure will provide students without the means to go to college, an opportunity to attend without taking on large amounts of debt.

“Forty percent of our college students choose community college. Some are young and starting out. Some are older and looking for a better job. Some are veterans and single parents trying to transition back into the job market. Whoever you are, this plan is your chance to graduate ready for the new economy, without a load of debt,” Mr. Obama said.

College tuition is on the rise and inhibiting many from receiving graduate degrees that would allow them to get higher paying jobs. In addition he requested that companies start providing more benefits for their employees including higher wages even without a bachelors or masters degree. In general, Obama solicited companies to provide more benefits because currently 43 million workers in the U.S. do not get paid sick leave.

Smoothing over the vast inequality that is present in America is pertinent to developing a better life for many citizens. Another subject he focused on was that congress needs to impose higher taxes on wealthy Americans who can afford to take higher cuts. This is likely to fail especially in a full GOP congress.

Some have called President Obama’s economic approach “populist” as he is appealing to ordinary Americans, many of whom are still suffering from the 2008 economic crisis.

Bipartisanship in congress was another focal point of the address. He focused on issues that in the past had garnered bipartisan support such as creating jobs. Although job growth in the private sector has been relatively successful, there are other parts of the economy where job growth has been limited.