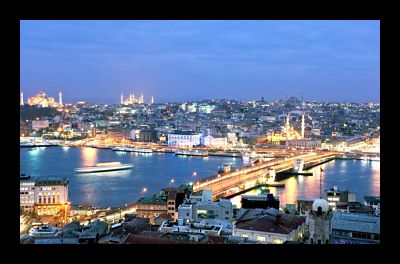 In the sprawling metropolis of Istanbul, which over 14 million people call home, there is a sense of progress and modernity. The city, the largest in Turkey, sits at the crossroads of Europe, the Middle East and Asia, and claims thousands of years of history.

Istanbul is one of the more diverse cities in Turkey. It is home to not only Turks, but also Kurds, the Romani people and immigrants from Europe, the Middle East, Asia, the Americas and Africa. While the tourist and central areas seem modern, safe and progressive, there is another side of the city.

Poverty in Istanbul is pocketed. About an hour bus ride out of the central city, there are two neighborhoods that are some of Istanbul’s poorest and most violent: Gazi Mahallesi and Karayollari. The first, Gazi Mahallesi, is a multiethnic neighborhood. The neighborhood sports anti-government vandalism and leftover destruction from riots by anarchist, Kurdish and leftist groups that reside there.

Karayollari, separated from Gazi Mahallesi by a highway overpass, is a primarily Kurdish neighborhood. Many of the Kurds who call the neighborhood home have been displaced by the violence in southeastern Turkey, where Turkey’s Kurds are the most populous. Karayollari seems to be stuck in a cycle of violence, encouraged by poverty and unemployment. Residents say the police no longer even venture near the neighborhood unless to break up riots.

Because of rapid and unplanned migration to the city, 70 percent of housing in Istanbul was built in 30 years. At first, housing was built wherever land could be found. These settlements are Istanbul’s version of shantytowns or squatter towns and are called gacekondu. The gacekondu originally were accepted by the city because they passed the costs of urbanization from the government to the migrants. The gecekondus were the homes of the poorest migrants who found work in the industrial parts of Istanbul.

The make-shift neighborhoods were accepted as a solution to urbanization through 1980s, but are now being razed in an attempt modernize the city. Forced evictions have occurred, putting already poor families into the streets of sometimes violent, dangerous parts of Istanbul. Early last year, a group of 30 Roma families, previously evicted from their homes, was in danger of being forcibly evicted again, this time from their makeshift shack camp. The group included children and elderly persons. Amnesty International reported that the group was “living in conditions of extreme poverty since their forced eviction” and was “without access to…electricity, clean water and basic sanitation.”

Overall poverty in Turkey is a diminishing problem. Over the last ten years, the number of people living on less than $4.30 per day decreased from 20 million to 1.7 million. In Istanbul, the percent of people living in poverty has decreased 2.2 percent over the last eight years. The government claims that this reduction is due to government support programs to poorer citizens.

There is some contest as the whether the government’s attitude towards poverty and the poor can really lead to effective policy. Dr. Ebru Soytemel, of the Oxford Program for the Future of Cities, says that the “current government regards poverty as a temporary, individual problem that can be fixed, not a structural problem.They say that your religion or your family should provide you with help.”

Distribution of poverty is a problem for Turkey. While overall inequality has diminished, the distribution of poverty is a stark reminder of the discrepancies among living standards within the country. When looking at a map of regional poverty rates in Turkey, eastern regions, where most of Turkey’s ethnic minority groups live, are severely disadvantaged. Istanbul, which is the most western region of Turkey, is the most well off. Istanbul is a microcosm of this map: minority neighborhoods are generally far worse off than primarily Turkish neighborhoods.