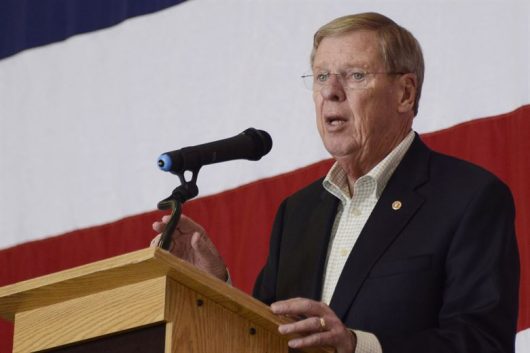 Now in his third term, Sen. Johnny Isakson is among a group of bipartisan senators trying to find the right formula for an immigration deal. Although his run as Senator began in 2005, his political and public service career started long before.

Road to the Senate

Finishing his education at the University of Georgia, Isakson served in the Georgia Air National Guard from 1966 to 1972. He was elected to the Georgia State Senate in 1993 and furthered his career as residing chair to the Georgia board of education.

Isakson continued his path in politics by becoming a U.S. Representative in the One Hundred Sixth U.S. Congress, filling Newt Gingrich’s open seat. He was re-elected twice more to the House of Representatives. In 2004, Isakson was elected to the U.S. Senate.

Sen. Johnny Isakson has done substantial work in the Senate and is willing to push forward in Congress when times seem troubling.

He has introduced the African Growth and Opportunity Act (AGOA) and Millenium Challenge Act (MCA) Modernization Act, which encourages U.S. commercial relationships with African countries that are committed to principles of good governance and looking to improve the trade environment between all parties.

The Economic Growth and Development Act is another bill Sen. Isakson sponsored through his career. This bipartisan legislation helps the private sector work with the U.S. to strengthen economic development, fight disease and alleviate poverty in developing countries.

Sen. Isakson has continued to promote and further U.S. capabilities in regards to foreign aid. He introduced the Reach Every Mother and Child Act, which aims to alleviate preventable mother and child deaths by 2035. This bill alone will help save lives and allow for mothers and children to receive medical help.

Sen. Johnny Isakson has done remarkable work through introducing bills and promoting foreign aid to strengthen U.S. international diplomacy. His work never ends as a U.S. Senator; Isakson’s office told The Borgen Project that his next priority in legislation is to ensure “the life-saving food security programs managed under the Feed the Future Initiative will continue for another five years.” The program not only helps neighboring countries abroad but also is an investment in U.S. national security.

Striving to assist other developing countries and further the growth of U.S. foreign aid is greatly shown in Sen. Isakson’s efforts in Congress. He is looking to promote through legislation an international environment for business to grow. Sen. Isakson’s office told The Borgen Project that “when you empower individuals, communities and businesses, you can help drive economic growth.” Action in communities and government go a long way to help the impoverished and this action is seen in Sen. Johnny Isakson’s career in Congress.

Sustainable Agriculture in American SamoaHow the U.S. Benefits from Foreign Aid to Zimbabwe
Scroll to top