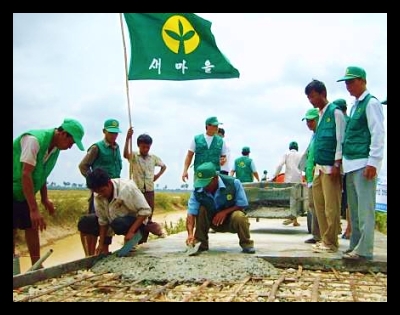 South Korea’s Saemaul Undong, or New Community, movement of the 1970s is lauded as one of the most successful economic development programs in modern Asia. This week the South Korean government announced its plans to use the experience and knowledge gained through this initiative to help the new government of Myanmar spur development in the Southeast Asian country.

The announcement came as the finance ministers of the two countries met to discuss future expansion of bilateral economic cooperation between the countries. The South Korean model is a community-based rural development program credited with modernizing the country’s economy and greatly reducing domestic poverty. The approach could offer effective strategies and guidelines for the future development of Myanmar as the emphasis is on enacting measures appropriate to the given political, economic, and social contexts  and is not about catch-all international theories.

As the largest country in mainland Southeast Asia and located in a prime position between the major global economies of India and China, Myanmar has great development potential. South Korea understands the unique opportunities that an investment in the economic expansion of Myanmar could potentially offer. In addition to an ad hoc advisory role at the policy level, South Korea is also pledging assistance to build a “Korea-Myanmar friendship bridge” over the Yangon River.

The bridge would allow more disconnected, rural communities new and expanded growth opportunities. South Korea also acknowledges that the assistance would have a public relations element, with the aid garnering the country a favorable opinion from the people of Myanmar. Such positive public opinion would definitely be helpful when South Korean companies begin to venture into Myanmar’s economy. Such an entrance will more than likely initially center around a planned industrial complex on the southern part of the Yangon River. The complex is set to involve South Korean investment.

Despite the promising investments from abroad, Myanmar faces significant challenges to its development. The country’s transition from an authoritarian regime with a tightly controlled economy to a democracy with free markets is certainly daunting. With over a quarter of its population living in poverty, Myanmar is one of the poorest countries in East Asia.

This poverty carries population challenges, like the high rate of 32% for children under the age of five suffering from malnutrition. While such a statistic holds concerns for the future and quality of social and economic development within Myanmar, other issues have more direct and immediate effects on development. Chief among these issues is the lack of modern infrastructure. Most notably, 75% of the population does not have access to electricity. With electricity consumption stuck at 20 times below the world average, the country faces huge barriers to entering the global market.

Fostering real, sustainable development in a country with such limited availability of basic, modern infrastructure capabilities will be a difficult challenge. These unique challenges, though, are potentially well-suited to the model of the South Korean Saemaul Undong. Through the empowerment of the rural communities and major investment, both domestic and foreign, in infrastructure, Myanmar could be well on its way to becoming the new Asian success story.

Can China Overcome Its Counterfeiting Reputation? Suspicious Statistics on Hunger in Venezuela
Scroll to top