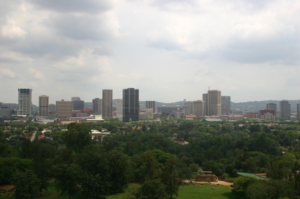 The battle against poverty has always been a difficult one, but the novel coronavirus pandemic has presented many new challenges. Actions currently being taken to combat South African poverty and COVID-19 have proven that, with new options and renewed commitments, there is still much that can be done to alleviate poverty. Impoverished people around the world need aid now more than ever.

Historically, South Africa has struggled to aid its most economically vulnerable citizens. According to the most recent government analysis, almost half of the adult population is living under the poverty line—an alarming figure. It seems apparent that this South African poverty crisis would be seen on nearly every level of society. Sadly, this widespread poverty has had a notable impact on which necessary resources are available to people. While electricity infrastructure is fairly widespread, between 28% and 30% of poor households lack access to water and sanitation services. As is relatively common in cases of inequality, the most vulnerable frequently lack access to basic necessities, making their struggles far more urgent.

The 2020 COVID-19 pandemic is poised to exacerbate South African poverty. The World Bank has predicted that while the pandemic will increase poverty worldwide, the hardest-hit region will be Sub-Saharan Africa. Although South Africa has been relatively spared from the worst of COVID-19 on a health level, the poverty-inducing effects of the pandemic are daunting—it is projected that some 23 million South Africans will be pushed into poverty in 2020. Beyond the immediate tragedy, this decline will present new challenges. In order to protect them, governments will need to find new ways to offer meaningful support throughout the crisis.

Fortunately, the government of South Africa has begun to take steps to properly aid its impoverished citizens during this time. They have rolled out a new, easily accessible digital tool called HealthCheck in order to provide self-assessment resources. Members of the public can download the program, which will ask them a few simple questions and then provide a COVID-19 risk prediction along with a pertinent guideline and suggested actions.

While HealthCheck is designed to be available to the entirety of the South African populace, it aids low-income South Africans in particular. Although only a third of the population uses smartphones, feature phones enjoy more widespread use, so a lack of hardware is not necessarily an issue. For many impoverished people in South Africa—and across the world—receiving the proper healthcare needed to determine a risk of infection may be difficult or outright impossible.

To further alleviate this issue, the South African government has coordinated with network operators MTN, Vodacom and Telekom, to have facilitate free access to the USSD line. This way, South Africans who could not typically afford cellular or wi-fi services can make use of the HealthCheck tool. As a matter of fact, they have—authorities have reported that so far, over one million members of the public have used HealthCheck.

The digital tool has been utilized in conjunction with NGOs like Doctors Without Borders.  The NGO has worked to fill the gap in fighting South African poverty by creating impromptu field hospitals in otherwise-ignored townships. In Khayelitsha, it has opened up 70 additional beds in a basketball arena in order to serve as many people as possible in the area. This was part of a broader government plan to have over 1,400 extra beds ready as needed. Providing aid such as this is an important part of the battle against poverty.

The COVID-19 pandemic has disrupted the growth of the continental African economy, and threatens its growing middle class. Across the entire continent, nearly eight million people are predicted to fall into poverty, in many cases due to the lack of a social safety net. By providing essential resources, NGOs like Doctors Without Borders are working to limit the economic burden that falls on the South African populace.

While it’s just a start in terms of supporting the impoverished population, these initiatives have clearly provided accessible ways for low-income citizens to keep themselves and their loved ones safe and healthy. There are still many hurdles to overcome in the fight against South African poverty, but these recent initiatives have shown that we can still work to effectively aid the poor.