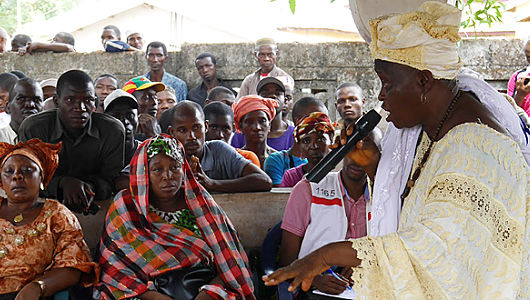 In May 2015, Ebola emerged again in Guinea. This time in an area that had not experienced the virus before, in the town of Tanene in the Dubreka Prefecture. The World Health Organization (WHO) is putting lessons previously learned from five outbreaks in the Democratic Republic of Congo (DRC) as well as Guinea’s outbreak in 2014 to good use in Tanene.

Community engagement is key to putting an end to Ebola, and one of WHO’s social mobilization experts, Marie Claire Therese Fweto Mwanza, is at work in Guinea.

Mwanza helped end five of the seven outbreaks in DRC, the last one in three months. She has trained 60 colleagues to currently provide social mobilization work in Guinea. Social mobilization is a process to raise awareness of a development objective, in this case, how to prevent the spread of Ebola, through dialogue in the community.

Social mobilization also raises the demand for action needed to accomplish the objective. In Guinea, the dialogue transpires at the community level with the help of allies. Community networks, civic and religious groups and other related partners coordinate efforts to induce the change necessary to stop Ebola.

WHO, the Ministry of Health of Guinea, U.S. Centers for Disease Control, Red Cross Guinea and United Nation Children’s Fund all came together to launch a surveillance campaign in June.

Mwanza, who has worked for WHO for 27 years, is confident that her experience in other campaigns will be effective in Guinea.

Before any surveillance work could take place, it was essential to understand the community so that the dialogue could be tailored in order to be effective. According to Mwanza, listening is one of the most important skills.

Speaking with compassion and being careful in conversations is also essential to making headway. These traits encourage the community to participate in the surveillance and take measures to protect themselves and their families.

One of the problems is the rumors that spread throughout a community. In Guinea, almost 60% of the people believed that blood was being sold. Mwanza knew how to deal with this situation because of lessons learned in 2012 in DRC. She said that the rumor was so entrenched in DRC that families hid their sick relatives in the forest and attacked Doctors Without Borders.

In order to deal with this at that time, Mwanza said they had to find out how this rumor took hold. Fifty nursing students were trained to survey community members.

Guineans told them, “When you go to an Ebola Treatment Unit, your heart is punctured, and 20 liters of blood are drawn. Your genitals are cut off, and your blood and organs are sold on the international black market.” Armed with this information, aid workers were able to tailor their messages and their next steps.

In DRC, the next step was to help people see with their own eyes how patients are treated in ETUs, so three community leaders were outfitted in personal protective equipment (PPE) and saw how patients were provided food and were not having organs cut or being killed.

Next, these leaders went door-to-door with Mwanza’s social mobilization team and Ebola survivors to testify in the community that an ETU saves lives. Such testimonies build trust among community members who then not only bring sick families into an ETU but also help trace and find contacts.

The same procedure worked in regard to a rumor about safe burials. A victim of Ebola must be buried by people wearing personal protective equipment. But families prefer to be able to touch the loved ones they are burying.

They were also afraid that organs were being cut out. After dressing a family member in PPE and having him participate in the burial of a loved one, he was able to testify to community members that a safe burial is necessary and appropriate.

Mwanza explained that they approached Guinea in the same way, “Not only did we engage communities to help with educating their neighbors about Ebola, we also encouraged them to actively participate in community surveillance and contact tracing.” Mwanza and her team trained 250 surveillance officers and 25 supervisors from the community to work actively in their own areas in Guinea.

On the first day of the surveillance campaign, rumors still thrived. Many Guineans heard that Ebola teams were coming to disinfect their homes and give them injections, so they shut their doors or temporarily left home. When the community members who stayed home and were visited by the surveillance team told their neighbors that the campaign was safe, many families returned home.

After that, surveillance teams were able to carry out intensive door-to-door visits. Teams explained the risks, the prevention measures and the importance of declaring illnesses and deaths. The Ministry of Health provides free healthcare for all cases during the campaign as well as soap and food during the 21-day surveillance period.

These measure are intended to encourage people to declare illnesses and deaths and allow them to stay at home to take care of family members.

Further community engagement was employed through key groups, such as religious, youth, women and workers’ unions. Representatives were invited to speak to the community to emphasize the campaign message: cooperate with Ebola teams, be vigilant and share information.

Resistance to respond to Ebola in Guinea is still a concern; for example, rumors still abound and people don’t believe that Ebola is real. However, WHO continually assesses community reaction and uses what it learns to adapt its methods to combat misinformation. In this way, progress is being made in Tanene.

“People are listening to programmes about Ebola on community radio, signs and stickers are posted throughout the villages and important conversations are taking place on the streets,” Mwanza declared.

She noted that children and youth are especially effective in the community engagement process. Children bring home messages about Ebola from school. Youth can have a strong influence in a Guinean community in regards to Ebola. One young man left this powerful message in the dirt outside his home: “Stop Ebola.”