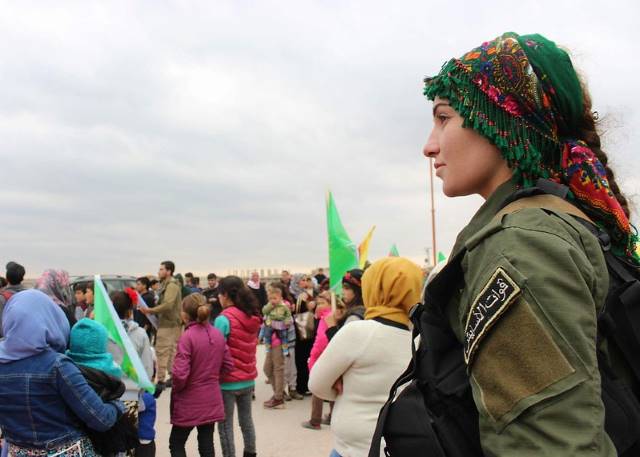 Rojava, also known as the Autonomous Administration of North and East Syria, is a region in Northeastern Syria. It was born out of the political instability that started at the beginning of the civil war in 2011. Surrounded by conflict, Rojava represents a rare success story of a war-torn region determined to help its local communities by reducing poverty through social ecology.

Rojava functions as a confederated system of local communities. Political decisions are implemented by democratic means and policy is decided from the ground up. Members of the immediate community have the first and final say on policies and practices that affect their communities directly. This political method of local autonomy relies on a specific degree of local sustainability and social responsibility. Communities take an active role in ensuring each member can access essential resources such as food and clean water.

Ecological sustainability is strong at play. Communities in Rojava aim to transform the landscape back into a more ecologically diverse and fertile area. This will mean reversing land practices inherited from the Assad regime. Groups such as the Internationalist Commune of Rojava, and its project, Make Rojava Green Again, focus efforts on this transformation. This is the crux of how Rojava hopes to reduce poverty through social ecology.

Under the Assad regime, Northern Syria became deforested and transformed into monoculture croplands. One example of the practice is the deforestation of Afrin in favor of planting olive trees. This practice, along with the use of chemical fertilizers and unnatural water sources, destroyed the quality of topsoil and degraded the overall fertility of the land. Such practices also forced the population to rely on supermarket-based systems of distribution to purchase food and other essentials, decreasing local access to resources in favor of international markets. This form of politically-induced scarcity increased poverty rates in the Kurdish regions of Northeastern Syria.

After the withdrawal of the Syrian Government in 2011, lands once used for monoculture cultivation were expropriated by local farming cooperatives. These cooperatives form the basis of the economic system that now functions in Rojava. Each cooperative includes roughly 25 to 35 people. The priority of each cooperative is to provide for the basic needs of the region’s most impoverished citizens. The reallocation of resources and land back to local communities has seen success.

The localization of food production has notable environmental and social benefits. According to a study conducted in 2019, eggs supplied by local cooperatives required less than 2% of the monetary cost and energy needed for eggs supplied by modern supermarket supply chains. This means the people in Rojava have improved access to food, and, at a substantially reduced cost.

The Make Rojava Green Again project has spearheaded multiple ecological initiatives throughout Northeastern Syria aimed at reducing poverty by encouraging practices of ecological sustainability at the local level. Examples of such initiatives include efforts to rebuff rivers with the reforestation of native plant species. This will create wider access to clean water for communities that rely on such rivers. Other examples include reusing water for irrigation and planting urban gardens in order to grow food for impoverished members of the community who cannot grow their own. This will increase food security for otherwise vulnerable areas.

Despite the threat of military annihilation, Rojava continues to implement a green future for its citizens. Ecological initiatives have increased access to natural resources for populations in both urban and rural environments. The effort to reduce poverty through social ecology in Rojava is an ongoing initiative that requires international support if it is to survive. Nevertheless, Rojava has already demonstrated the effectiveness of such measures, and in doing so, has provided the rest of the world with a model for a green future.