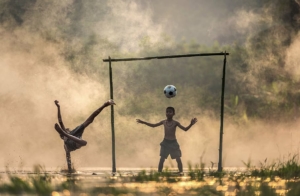 Soccer is the most popular sport in the world. As one of the most accessible games to play and watch, billions of people enjoy soccer. However, few are familiar with the impacts of soccer off the field. The sport has accepted an integral role in ending world hunger through its clubs, players and governing bodies. Many casual soccer fans are familiar with Marcus Rashford’s role in restoring over £120 million worth of food aid to underprivileged English citizens, a feat that is nothing short of remarkable. However, one cannot merely relegate soccer’s impact to the developed world: soccer is fighting world hunger, especially in developing nations.

Many larger soccer groups have committed to combating world hunger. One prominent example is the Professional Football Against Hunger campaign, which the U.N. Food and Agriculture Organization (FAO) and the European Professional Football Leagues (EPFL) co-founded and signed. The EPFL represents 27 member leagues constituting over 900 soccer clubs across Europe. This campaign reached millions of fans, generating record-breaking donations to food-aid projects. In addition, the organization created a recurring event named Match Day Against Hunger, in which over 300 clubs played in matches dedicated to raising awareness for world hunger. This awareness campaign helped put world hunger at the forefront of the soccer community’s mind, in addition to encouraging action from individuals and clubs alike.

Soccer clubs themselves also play a massive role in fighting child and family hunger. Much like how soccer clubs in England support their regional communities, soccer clubs in developing nations also assist local populations. One gleaming example is the Everton Uganda Football Academy. This facility has committed itself to aiding the communities from which it recruits players, most recently donating food and medical supplies to 50 families. Fortunately, Everton is not an anomaly: many clubs in underdeveloped countries provide food assistance, particularly to the families of their budding players. The club cannot expect players’ and prospects’ best performance if they do not have adequate nourishment; thus, there is an incentive to provide for them. Many of the world’s best current soccer players – including Cristiano Ronaldo, Neymar and Gabriel Jesus – were food-insecure during their childhoods. Soccer programs provide not only food to young players, but also an opportunity to follow their dreams and prosper.

Many of the world’s best professional soccer athletes have had humble beginnings. As a result, some of the most dynamic advocacy for hunger relief has originated from the players themselves. One example of an avid advocate for fighting world hunger is Kaká, a former AC Milan and Real Madrid star. Kaká became the youngest United Nations World Food Programme Ambassador at age 22, serving as the main endorser and contributor to the Fill the Cup campaign that ultimately fed over 20 million undernourished schoolchildren in nearly 80 developing countries. Kaká’s influence not only garnered millions of dollars to save the lives of millions but also encouraged many children to remain in school.

In the United States, college soccer programs have also answered the call to fight against world hunger. While university soccer teams are largely underfunded – and thus unable to make large donations to charity – they are often extremely committed to issues surrounding world hunger. The University of North Carolina at Chapel Hill’s men’s and women’s soccer programs, for instance, sent an incredible 285,000 meals to Nicaragua to aid underprivileged families and youth. While monetary funds are hard to come by for many college athletics programs, the University of North Carolina powerfully demonstrates how these programs can donate time and money to do what they can in aiding others.

As the most popular sport in the world, soccer has nearly infinite influence. Especially for a massive issue like global poverty where it is difficult to recognize the pockets of solutions that some are implementing, it is essential to acknowledge how soccer is fighting world hunger. Fighting world hunger is not a task for food-aid specific groups alone, and soccer programs worldwide are helping to lead the charge.