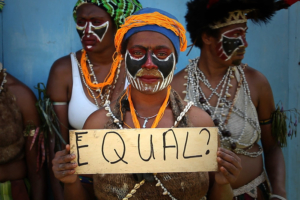 Every year, both citizens and tourists fall victim to sex trafficking in Papua New Guinea (PNG). PNG is also used as a common transit point to aid in exploiting individuals from other countries.

What is Happening in Papua New Guinea?

The U.S. Department of State placed PNG on a Tier Two Watch List. “The government of Papua New Guinea does not meet the minimum standards for the elimination of trafficking but is making significant efforts to do so,” according to the U.S. Department of State report. There are many challenges and attributes to consider when evaluating sex trafficking in Papua New Guinea. Although PNG lacks a lot of resources, the country has begun to improve in its elimination of sex trafficking.

As one of the World’s least developed countries, PNG faces many challenges with education, advocacy and law enforcement of sex trafficking. Furthermore, the country has not prioritized the incarceration of traffickers. According to the TIP 2021 report, PNG did not report any new investigations or prosecutions in 2021.

Since its Criminal Code Amendment in 2013, PNG has only prosecuted one individual that resulted in incarceration in November 2020. However, since the beginning of the COVID-19 pandemic, PNG has seen a decrease in all criminal investigations, with minimal energy spent on sex trafficking, according to the U.S. Department of State.

Although sex trafficking in PNG may look glum, the country is continuing to work toward the goal of elimination. Since the release of the 2020 Trafficking in Person (TIP) report, PNG has gone from Tier Three to a Tier Two Watch List. The main difference in these tiers is that as a Tier Three, it is stated there is no effort to eliminate trafficking.

PNG has also made slight efforts to broadcast and spread awareness to the public. On the country’s national day against human trafficking, “local authorities sponsored an article in their national newspaper to increase general awareness of trafficking,” according to the Tier Two Watch List.

In coordination with law enforcement agencies, the International Organization for Migration (IOM) has provided aid for both international and domestic victims. In 2019, PNG launched a “safe bus” in the capital city of Port Moresby which expanded to Lae. The bus began as a result of sexual harassment and assault on public transportation. Since its implementation, it has kept women and children safe in transit to and from work and school.

There are many providers of aid internationally, including the U.N., IOM and the U.S. government. Within the TIP reports, the U.S. Office to Monitor and Combat Trafficking in Persons also provides Prioritized Recommendations. Most notably, the recommendations, among others, include “implementing existing standard operating procedures (SOPs), increasing protective services for victims of trafficking, instituting a policy framework, increasing awareness of and participating in the committee by civil society and protection stakeholders and acceding to the 2000 U.N. TIP Protocol.”

As a Tier Two Watch List country, the elimination of sex trafficking in Papua New Guinea is slowly improving. However, a lot of work needs to be done to accomplish this. With “an acute lack of financial and human resources,” according to the U.S. Department of State, PNG struggles to make strides.

Although domestic attempts to eliminate sex trafficking may appear minimal, the country has shown great growth by improving on the TIP Tier list. International support such as aid from the U.S. and the U.N. is continuing to rise. The government has followed prioritized recommendations, such as amending the criminal code in 2013.

The International Labor Organization (ILO) estimates that there are 40.3 million victims of human trafficking globally. It can be difficult to look past such daunting statistics. However, PNG is growing its resource pool and on the road to the elimination of sex trafficking. With the continued support of foreign aid, sex trafficking in Papua New Guinea could improve.