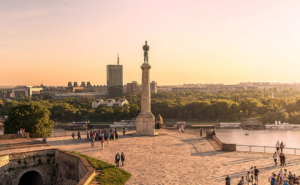 Serbia is a European country that was formerly a part of Yugoslavia. Located in the West-Central Balkans, it is surrounded by Romania, Hungary, Bulgaria and Croatia. The majority of the population is of South Slavic origin and they speak Serbo-Croatian, which is nearly the same language that the Croats, Bosniaks, and Montenegrins speak.

Over time, a majority of Serbia’s population migrated to the capital city Belgrade from more rural areas. As recently as 2018 however, 43.9% of the people in Serbia still lived in the countryside. In 1945, when the country was still part of the former Yugoslavia, Serbians were under a socialist economic system. Although some free-market characteristics were later adopted in 1948, there was still a large emphasis on socialist self-management.

Today, the youth in Serbia have been consistently making efforts to promote and provide a platform for entrepreneurship among young citizens. Near Belgrade—which has been a center for innovation and entrepreneurship over recent years—is the Impact Hub Belgrade.

One problem affecting the economy in Serbia is related to job availability among young citizens. The unemployment rate among youth is 40%, so providing employment opportunities to these citizens would impact a large portion of the population that is struggling to enter the job market or start businesses.

As a result of poor job opportunities, large numbers of young Serbians leave Serbia in search of work elsewhere. If the youth had more accessible jobs and economic opportunities, it may be more compelling for them to stay and stimulate their own economy, as opposed to the economies of other countries.

Impact Hub focuses on supporting young entrepreneurs by strengthening their networks with investors in order to attract their investments. This provides an economic foundation for businesses to operate and produce goods and services.

One of the programs initiated by Impact Hub was called the Launch Pad, which provided these young entrepreneurs not only with tools needed to create new products, but with training to broaden their business skills. In addition, the program helped the youth in Serbia develop business models and connect with investors at home and abroad. This program received grants from USAID to help with funding.

Even though the program has ended, it raised a total of $230,000 from the domestic public sector, as well as from the private sector both at the national and international levels. Investments continued, including a $100,000 fund from the Innovation Impact Grant Program in Dubai.

Serbia’s economic freedom score by 2020 has increased by 2.1 points, bumping it to 66.0, and it saw GDP growth as recently as 2018. Even though Serbia has faced numerous economic difficulties since its independence, there are efforts being taken by its citizens to drive and stimulate the economy. The youth in Serbia have especially taken notable actions and the country continues to be supported by the USAID and many other programs and countries domestically and internationally.