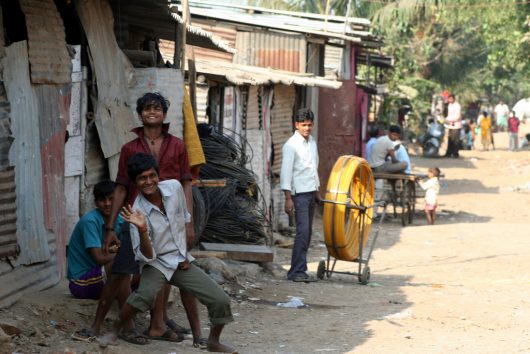 “The role of a granny in a family is . . . [to be] uncritical and . . . encouraging,” said Jackie Barrow (in a video), a volunteer with the e-monitor service Granny Cloud. From her home in Diggle (England), Barrow uses Skype to talk to children thousands of miles away in India. The program is a component of the global “School in the Cloud,” created by the educational technology professor, Sugata Mitra.

In 1999, Mitra was teaching computer programming in New Delhi, India. From his classroom window, he noticed children from a slum playing in the street. As an experiment, he carved out a hole in the school’s wall and installed a computer monitor. Several weeks later, he returned and queried the street children about the computer. Much to his surprise, they answered him in English, a language they’d learned from the internet.

Over the following decade, Mitra repeated this hole-in-the-wall model in several locations throughout India with great success. Mitra believes that if you provide children with internet technology, their curiosity and wonder will propel them to teach themselves. Over time, he recognized children performed better if an adult figuratively looked over their shoulder and praised them. He compared this guidance to a grandmother who gives loving, non-judgmental admiration. It also helped if the grandmother archetype spoke English, the language of the web. So he enlisted an army of British volunteers through the Granny Cloud.

In 2013, Mitra won a U.S. $1 million TED prize, allowing him to expand his School in the Cloud to Asia and Africa. According to Mitra, the encouragement, not the criticism, is the key to his “self-organized” learning approach.

Mitra believes modern schools are modeled on the principles of the British Empire to uniformly educate people when they are placed around the globe to perform similar tasks. That construct is outdated in today’s world where informational speed, creative thinking and innovation are paramount.

A cornerstone of the Victorian school model is instruction by fear. Testing, a threat of failure and punishment can trigger panic in the human brain. Sensing fear and attack, kids’ cognitive thinking may lockdown when they go into a flight-or-fight response.

The ideology of School in the Cloud propels children forward by tapping into their natural curiosity. The key is to advise adults to step back and leave students alone with technology to answer open-ended questions, such as “Can you kill a goat by staring at it?”

Mitra is not without his critics. Larry Cuban, Professor Emeritus of Education at Stanford University, skeptically refers to Mitra’s approach as “magical thinking.” He claims increased technology in education produces tepid results. In the One Laptop Per Child project in Peru, there was no increase in math or language skills and small benefits in cognitive thinking.

An online learning expert, Donald Clark, goes further. Clark outlines seven problems with Mitra’s work in his blog, “Plan B.” His criticisms include lack of objective, quantitative analysis of results, a coziness with e-learning benefactors and theft of monitors.

Supporters of the School in the Cloud point to Mitra’s outreach to unprivileged children in remote corners of the world where no schooling exists. And there is something to be said for the rapport that Jackie Barrow and the granny army are building with their students. Barrow often opens her e-mentoring sessions with jokes, stories or pictures of English gardens.

“You can’t catch me!” she reads from the Gingerman fairy tale.

“You can’t catch me!” her children repeat with delight and enthusiasm.