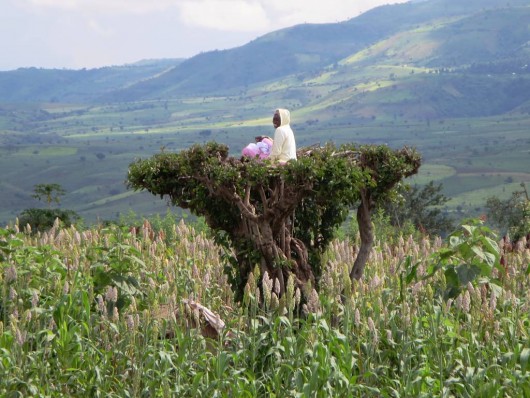 Going to the bathroom: a subject that, as humans, we like to pretend doesn’t even happen most of the time. However, for rural Ethiopians living without the most basic sanitary structures, an initiative to improve latrine use was one which needed to happen.

In the village of Kurt Bahir, local carpenter Kefale Demelash used his skills to build a two-room latrine for public use within the village after becoming inspired to initiate sanitary improvements after a diarrhea outbreak plagued the area.

For this particular latrine, one side was designated for women and the other side for men. Smaller pits were also dug for children which would be safer than customary ones, encouraging the young to start the habit of using them early.

With just the establishment of this one latrine, others were motivated to create their own. Soon, with the help of Demelash, 126 latrines were created within Kurt Bahir, all meeting the international standards for improved sanitation. These new latrines would help reduce the risk of communicable diseases, which are commonly spread by unsafe sanitation practices.

Demelash was able to receive training as a village coordinator through the government’s Health Extension Program (HEP), which trains and deploys members into rural areas of the country to educate and promote sanitary practices.

Further progress in sanitation is also being made through the Water and Sanitation program (WSP), a five-year multi-donor partnership between the World Bank and the government.

The World Bank describes the program goals as “scaling up its capacity, improving sanitation and hygiene services and increasing access by the poor in 104 selected districts in Amhara, Oromia SNNP and Tigray regional states.”

Ethiopia has suffered through many different kinds of communicable diseases attributed to poor hygiene and sanitation. However, with the execution of the government’s Universal Access Plan (UAP), it is hoped that sanitation can be improved by 100 percent.

Currently, more than 7 million people have been educated on healthy sanitation practices by 1,782 trainers and implementers under the program. Prior to the program, open defecation was a recurring problem, but with the organization in full-swing, 52 percent of the kebeles (an administrative unit within Ethiopia) in the woreda (districts) are defecation free.

Taking a creative approach in the program’s expansion strategies, prizes were offered within villages. This was initiated by a local “savings mechanism” through the woreda, where the prize money was given to the best innovator, performer or implementer of an improved sanitation project.

With this strategy in mind, neighbors found inspiration in one another, which ultimately led to improvements across woredas.

The World Bank found “in Mecha and Medebayzana woredas, more than 55,000 households now have improved latrines, and communities have also started applying the sanitation lessons they learned in their daily lives, such as keeping their homes, compounds and communities clean, making themselves safer and healthier.”