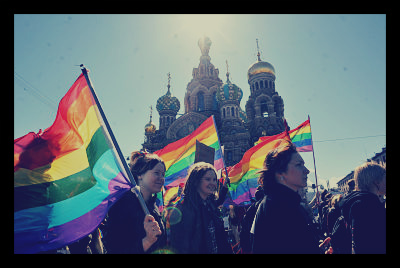 Russia has been in the spotlight recently for its part in playing host to the Winter Olympics. Hosting the games is an opportunity in which a country can reap the benefits of great publicity and a surge in business from all the people that flock there for the historic event. Russia, however, has had more negative press than positive because of its blatant disregard for ethical treatment of the lesbian, gay, bisexual and transgender (LGBT) community, causing recent uproar among many.

Many are quick to point fingers and blame President Vladimir Putin for not implementing laws to protect them. While Putin deserves some of the blame, Russia has had a long history of homophobia.

Homophobic laws have been enacted as early as the 17th century, with Peter the Great’s punishing homosexuals by flogging or by male rape. As the years progressed, the law extended to punish any adult man that voluntarily participated in sodomy-like behavior.

In 1835, Tsar Nicholas made sure that ban was still being withheld against homosexuals with them being stripped of their Russian citizenship and exiled to Siberia.

Of all the Tsars and rulers, Joseph Stalin was the most intolerant of the LGBT community. Homosexuals were sentenced to hard labor prison camps for 4 years to 5 years under his reign and made-up propaganda had run rampant. Stalin was a huge proprietor and believer that homosexuals were pedophiles who were constantly lurking for young boys. His paranoia that homosexuals were praying on children and that they had “politically demoralized various social layers of young men, including young workers, and even attempted to penetrate the army and navy” compelled him to have his secret police spy and arrest anyone that was perceived to be gay.

Violence against Russia’s LGBT community has only worsened. Putin endorses violence against the community not only because he sees them as “foreign agents” or as a danger to the well-being of children, but as a political tactic as well. Milene Larson, a United Kingdom-based journalist, states, “Putin is looking for enemies. In Russia, homosexuals and gay rights activists are labeled as foreign agents… You have such a vast majority of people who are Orthodox who potentially feel this way, those are his voters…he is not going to step back and say ‘actually gay people are ok.’”

For anti-gay groups like Occupy Paedophilia, Putin’s views on the LGBT community are green light for vicious mob attacks to try and “cure” them. These mobs upload their videos using WhatsApp (a YouTube like clip-sharing application) to humiliate their victims even further. These groups will pose as a homosexual on an Internet dating site or go to gay clubs where they can find someone that falls under the impression that the perpetrator is interested; the victim is then ambushed or kidnapped.

One horrifying account was of a teenage student from Uzbekistan who was lured by the mob group, kidnapped, beaten, stripped and raped. All of these atrocious acts were being filmed while they were being done, with the group telling the victim that they were punishing him for his own good. Another account tells the story of a 23-year-old man who was killed for coming out to his friends while they were drinking.

Russia’s LGBT community faces physical and verbal harassment every single day. For such a large and diverse country, the LGBT community has few allies. With a leader that will not speak out and condemn these attacks, they have nobody to whom they can turn. They cannot turn to the police for help because police officers often commit the crimes and do not report the issues. While the fight rages on for activists to achieve equal rights for the LGBT community, this is going to be an uphill battle for a long time to come.