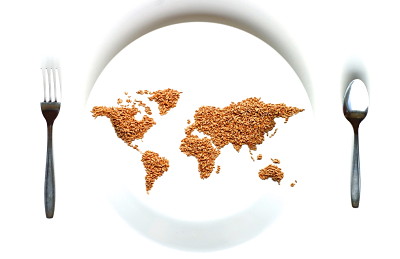 An Indian farmer from Bihar, the poorest state in India, has managed to grow a world record of 22.4 tonnes of rice on one hectare of land. Sumant Kumar of the village of Darveshpura is just one of many other farmers who have managed to reap more than 17 tonnes of rice. Agricultural scientists and development experts are both bewildered and excited as to how record amounts of rice are being grown using only farmyard manure and without the use of herbicides. This revolution of rice farming in India has the potential to greatly reduce poverty in a world where a huge majority live off a diet of rice.

Before Kumar’s crop of 22.4 tonnes, the record was held at 19.4 tonnes by Chinese agricultural scientist Yuan Longping who is known as the “father of rice.” Also outdone were scientists of the International Rice Research Institute in the Philippines and some of the biggest European and American seed and GM companies. These record growths aren’t stopping with rice either. Six months after Kumar’s record-breaking crop, his friend Nitish broke another world record for growing potatoes. Another Bihari farmer, Ravidra Kumar, broke the Indian record for growing wheat. With all these recent developments, the village of Darveshpura is quickly gaining a reputation as India’s “miracle village.”

Scientists and development experts have conducted tests on the soil to determine the cause of these “super yields.” Besides a richness in silicon, the key catalyst has been found to be the utilization of a farming method known as System of Rice (or Root) Intensification (SRI). SRI consists of nurturing half as many seeds as normally are done and transplanting them when younger in the grid pattern to keep the soil from drying faster. This “less is more” method has led to increased yields of wheat, potatoes, sugar cane, and many other crops and opens a door to a long-term sustainable alternative to the “green revolution” which involves changing the genes and soil nutrients to improve yields.

Agricultural scientists are at odds as to whether the SRI method is the main cause of such high yields. Regardless, it is increasingly being accepted as one of the most significant developments for farmers in the past half-century. Dr. Surendra Chaurassa from the Department of Agriculture of Bihar believes that this could change the way rice farming in India is being done and recommends that every state in India incorporate the method. “Farmers use less seeds, less water and less chemicals but they get more without having to invest more,” he said.

As Dr. Chaurassa describes it, the process is “revolutionary” especially in a nation where 93% of the population of 100 million depends on growing rice and potatoes. Bihar, the poorest state in India, is now in the middle of this “new green grassroots revolution.” Nitish Kumar who can now afford to send his children to school and spend more on health says, “In previous years, farming has not been very profitable. Now I realize it can be.”

Why Investing in Africa is the Right Move$1.25 and Change: The Cost Of Living In The Developing World
Scroll to top