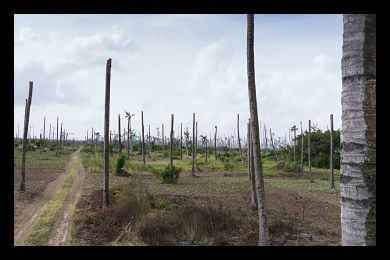 A little over three years ago, the trees in Mozambique’s coconut groves began to develop brown spots. The leaves would then turn yellow and the coconuts would prematurely drop to the ground. At the end of three to six months, the top half of the tree would break off and fall to the ground.

Coconut Lethal Yellowing Disease has been the cause of the trees’ deaths. The disease is spread by the rhinoceros beetle, who buries its larva into the fallen trees and saplings. Now, just three years later an estimated half of Mozambique’s coconut trees have been destroyed. With the bark stripped, the groves now look like matchsticks sticking out of the ground. The only known cures are to plant resistant varieties of palm.

According to the Food and Agricultural Organization Mozambique was the largest producer of dried coconut meat in 2011, producing over 62,000 tons yearly. All of which are either exported, turned into coconut oil or consumed locally. It is estimated that Zambézia province, alone, has losses of over $4 million in exports each year.

Some measures have been taken to halt the spread of this disease. This past year the U.S. has aided 277,000 farmers through the Millennium Challenge Account financing the Farmer Income Support Project. This measure cleared 600,000 acres of infected trees and replaced them with 780,000 seedlings.

Even with aid, the coconuts that are being harvested are nowhere near the sustainable quantities of the past, nor are they the same size. Due to the young age of many of the trees, the coconuts are noticeably smaller.

While everything is being done to save the current coconut economy, many are urging the country to start looking for new cash crops, so the country is not overly reliant on one crop. Concern Worldwide, a nonprofit organization, is providing seeds, tools and training throughout Zambezia Province to cultivate tomatoes, sweet potatoes and lettuce as well as staple crops like sorghum and rice.

All of these plants have thrived in Africa’s climate, but Barbara Hladka, an agronomist working for Concern, believes that the plant with the biggest potential to replace the lost income from coconut sales is sesame seeds. “We are seeing buyers coming to some of the most remote communities in Zambezia to purchase sesame directly from growers for as much as 40 meticais ($1.30) per kilo,” said Hladka. “This is much higher than what farmers used to sell coconuts for.”

This new wave of agro-economics, or the process of growing different crops to bring to market, has caught on fast to help many afford the opportunity to work their way out of poverty. It is a successful worldwide trend endorsed by many of the NGOs working in Africa, India and China.