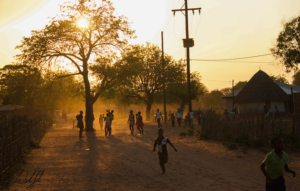 In South Africa, the need to address energy poverty is pressing as about 3.4 million households in the nation lacked electricity in 2015, according to the South African government. A recent strike in June 2022 by workers at Eskom, South Africa’s state-owned energy company, has led to prolonged electricity blackouts, amplifying already existing problems with the outdated, deteriorating coal-fired power stations and mismanagement. For many South Africans, these blackouts can mean up to eight hours per day without electricity.

Since 2008, Eskom has relied on load-shedding, or rotating blackouts, to mitigate the impact of the nation’s insufficient energy supply on consumers. The economic consequences of the more frequent blackouts in 2022 are severe, exacerbating inequality in a nation where more than half of the population lived in poverty in 2014, according to the latest World Bank data.

Amid the energy blackouts, poor families living in informal settlements and townships face disproportionate impacts and demand for electricity is only increasing as South Africa rapidly urbanizes. These recent energy grid failures and their negative repercussions on poverty point to the need to diversify South Africa’s energy sector.

Notably, South Africa has made substantial progress in expanding electricity access in the past — between 1994 and 2012, household electrification increased from 36% to an unprecedented 87%. Renewable energy sources have the potential to continue to fill the nation’s current void, alleviating the energy poverty that millions still experience. In 2014, South Africa’s Department of Energy set a target to provide electricity to 3 million households through the grid and an additional 300,000 households using non-grid solar energy, projected to resolve 90% of backlogs. While South Africa has not yet achieved this goal, the government has begun to zero in on renewable energy as instrumental to its approach.

On July 25, 2022, South African President Cyril Ramaphosa announced a series of interventions his government will take to address the energy crisis. Measures proposed include doubling the acquisition of renewable energy this year to more than 5,000 megawatts and providing incentives for households and businesses with rooftop solar panels to sell excess solar power to Eskom to reduce the need for load-shedding. These efforts to increase private sector energy generation are a necessary first step to facilitating this transition toward renewable energy in South Africa.

While these measures are an important start, South Africa will need to spend an estimated $250 billion over the next 30 years to finance shutting down coal-powered plants and transitioning to wind and solar power. Public resources lack the funds to provide sufficient backing for this effort. At the U.N. Climate Change Conference (COP26) in Glasgow, Scotland in November 2021, the U.S. along with European nations pledged only $8.5 billion to help South Africa transition away from coal. Thus, a significant contribution from the private sector will be critical.

According to Energy Minister Gwede Mantashe in December 2021, the South African government allocated $2.8 billion in contracts for 25 renewable energy projects to the private sector. These projects include wind farms and photovoltaic plants and should increase South Africa’s electricity capacity generation by nearly 5%.

Additionally, several companies are turning to solar energy, including South African Breweries (SAB), one of the nation’s largest companies. SAB aims to withdraw from Eskom’s grid, with the goal of sourcing 100% of its electricity from renewable energy by 2025. So far, these initiatives have shown promise: in 2021, SAB’s decision to transition to solar power resulted in more than 9,000 tons of carbon dioxide emissions reductions.

As of August 2022, USAID and Prosper Africa are overseeing a delegation of U.S. investors with more than $1 trillion in assets visiting South Africa to meet with fund managers, looking to invest in the nation’s transition to renewable energy.

This visit also coincides with the U.S. government’s attempts to deepen diplomatic ties with South Africa. On August 8, 2022, U.S. Secretary of State Antony Blinken met with South African Minister of International Relations Naledi Pandor to discuss the ongoing partnership between the two nations in trade and investment. Going forward, an active and continued diplomatic relationship between the two nations will be essential to achieve progress.

Looking Toward a Brighter Future

The possibility of large new investments in renewable energy in South Africa indicates a potential future of increased trade between the U.S. and South Africa. The transition away from coal-dominated energy will have transformative effects on the nation’s economic development, reducing poverty and deep-rooted inequality by creating a stronger, more reliable power grid and simultaneously reducing greenhouse gas emissions. Furthermore, the renewable energy industry represents an opportunity for tremendous job creation and increased economic opportunities.