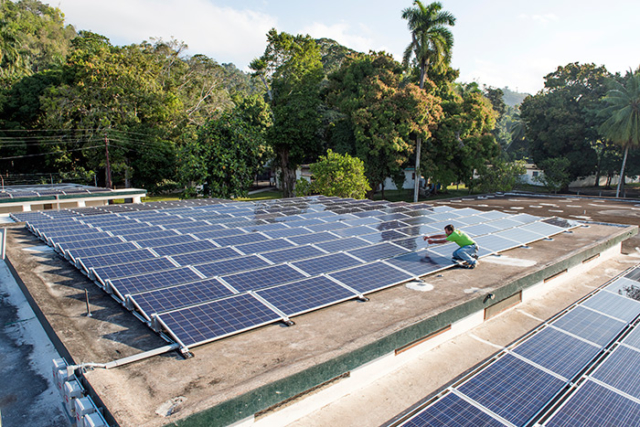 Recognized as one of the most impoverished nations in the world, Haiti has experienced a lot of turmoil over the last several decades. The challenges that political and natural disasters have brought have affected hundreds of thousands of people who now live in poverty and without access to electricity. Today, Haiti’s government is exploring new alternatives so that more people have the means to power their homes. Renewable energy in Haiti hopes to decrease poverty and increase access to electricity.

As it currently stands, only about 45% of Haiti’s residents have access to electricity. Right now, 80% of the electricity in Haiti comes from imported fossil fuels and those who live in rural areas find themselves relying on dirty energy solutions like wood and charcoal. These resources can potentially lead to environmental issues such as deforestation and carbon emission while also negatively impacting the health of Haiti’s inhabitants. For these reasons, Haiti’s government is committed to investing in new means of energy that are both clean and cost-efficient.

Although imported fossil fuels are Haiti’s primary source of electricity, there are several other options available that hold significant potential to transform Haiti if the country was well-optimized for these alternative sources. These resources are not only safe but are also renewable, meaning that they are unlikely to deplete or ever run out.

One alternative that Haiti is trying to integrate into its systems is hydroelectricity, which is power that water generates. Of all the renewable options available, hydropower has contributed the most to Haiti’s energy supply. It has improved conditions for those who live near areas where water flows, such as Haiti’s Artibonite River, where the Péligre Dam is based. Despite its prevalence in many communities, hydropower is still underutilized and it takes a lot of time and effort to incorporate such systems countrywide. With that said, the developments that Haiti’s government has made are promising and speak volumes about the future of Haiti. The Péligre Dam, which used to run at less than 60% capacity, is now generating 54 megawatts of power after more than a decade and will continue to provide sustainable energy for the next 40 years.

Solar power is another form of renewable energy in Haiti, which has a lot of potential due to the country’s warm and tropical location. In rural areas that do not receive electricity, such as Haiti’s South department, people depend on the energy that generators produce. Generators run on diesel, kerosene and other dirty solutions. These expensive generators, however, are not fully effective and only provide enough power to fulfill basic needs. The installation of mini-grids and solar panels in these areas could alleviate such problems and provide enough electricity for homes and businesses to receive power every day. Schools, hospitals and agricultural institutions are among those that can benefit from solar energy. Today, Haiti’s rural southwest has implemented grid systems to provide electricity for 8,000 people across 1,600 households.

While hydropower and solar power are at the focus of Haiti’s developments, other solutions are also available and can address additional issues the country faces. One example of this is waste-powered energy, which appeared as the subject of an initiative titled Project Phoenix. This proposal, which called for the collection of 1,600 tons of garbage every day, anticipated the generation of at least 30 megawatts of electricity per hour. The United Nations Environmental Programme (UNEP) published a final review of the project in 2014, highlighting the strategic recommendations and steps necessary to proceed as planned. Introducing a waste-to-energy method in Haiti would benefit cities such as Port-au-Prince, where garbage is overabundant and illegal dumping is a serious problem.

Wind energy is another option Haiti has considered, though it is not as viable since it depends on seasonal variability and location. Additionally, Haiti does not have any wind farms, which makes this alternative appear less effective. However, Haiti does have measurement systems to record data on the capabilities of wind power. Estimates suggest that wind power can deliver electricity at 30-50% of the cost of solar energy in windier areas. Though there are no plans to build wind farms in Haiti, the construction of a power plant did begin in 2017. Not only will the plant optimize wind but it will also be the first to utilize a mixture of wind, solar and diesel energy. The power plant will be able to produce up to 160 kilowatts of electricity.

While these renewable energy sources are capable of substituting imported fossil fuels, they also play a significant role in alleviating poverty. Hundreds of thousands of Haitians rely on generators, which are expensive and can only provide electricity for a limited time. By implementing renewable energy substitutes, impoverished Haitians can save money that would otherwise go toward paying for diesel-powered electricity, enabling them to afford other basic essentials such as food, water and shelter.

Over and above the fundamental benefits of renewable energy, the renewable energy sector has the potential to create job opportunities for Haitians. With the demand for low-cost electricity being so high in Haiti, businesses are starting to emerge and are combating the frequent problems residents endure. One company, known as 10Power, is a solar startup partnering with locals to install and provide financing for solar energy projects in Haiti’s rural areas. It was responsible for installing solar arrays at two of Haiti’s water purification centers, which provide water to local communities and support more than 600 microbusinesses. Women lead many of these microbusinesses.

The company also worked on the array installation at Haiti’s UNICEF headquarters, which was the largest solar installation on any UNICEF base in the world. The startup 10Power has grown dramatically since its founding in 2016 and is now working with a sales pipeline of projects worth more than $100 million. Today, it is collaborating with the Solar Electric Light Fund and Haiti Tec to provide field experience for student technicians and create jobs for many of Haiti’s men as women. Implementing renewable energy methods in Haiti is significant because doing so will positively impact the nation’s economy.

Haiti continues to explore various renewable energy options available in the hopes of making a positive difference in many of its cities and regions. If Haiti optimizes these alternatives correctly, the government will bring power not just to people’s homes but to their lives as well.