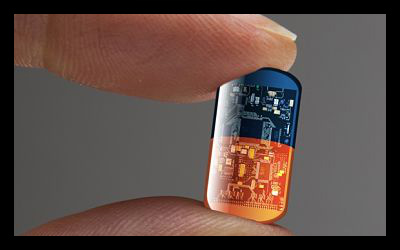 In less than four years, women could be receiving a remote control contraceptive. The implanted microchip provides a reliable dose of hormones every day for 16 years, which could make family planning and contraception much easier for women in the developing world.

The Bill & Melinda Gates Foundation-backed project is based off of research done in the 1990s by Professor Robert Langer of MIT. Langer leased his technology to MicroCHIPS, a company currently developing implants to release osteoporosis treatments into the body over regular intervals.

The microchip, roughly the size of a Scrabble tile at 20mm x 20mm x 7mm, has wells filled with the hormone levonorgestrel. When activated, a small electric charge triggers every day, melting the covering of the wells and releasing 30 micrograms of levonorgestrel into the body. The wells are covered with a mixture of titanium and platinum, which causes no harm to the body when melted.

The chip can be implanted in the abdomen, upper arm or buttocks. The process to inject the contraceptive is fairly simple, taking less than 30 minutes and using a local anesthetic.

Since many women may want to take a break from the birth control before the end of 16 years, the remote control allows them to switch their treatment on and off themselves. This puts power in the hands of women. There are security issues, such as the possibility for hacking, which could be a major problem if women do not realize their dosing has been tampered with. MicroCHIPS has promised that the control must be used right next to the skin, so no one can interfere with a women’s contraception without her knowledge.

Another issue is that injectable contraceptives do not protect against STDs, and some have even been shown to increase the chance of contracting HIV. Also, becoming fertile again after using hormones can take a while. These issues have not been addressed by the company.

Burkina Faso will soon implement the contraceptive Sayana Press, as will Niger, Senegal and Uganda. Sayana Press only lasts three months, and while the countries will provide delivery services for women who cannot come to hospitals or clinics every few months, it is still difficult to reach every woman in need of an injection. Some women may also forget to get a new injection.

South Africa currently has a system for a three-year contraceptive. The device is similar, except it cannot be remotely controlled and it must be replaced sooner. It is a Silicone, matchstick-sized implant made by Merck and marketed as Implanon. The Stanger Hospital in South Africa actually ran out of the implants and is struggling to provide enough for the women who want the contraception.

There is a large desire for this kind of contraceptive in the developing world, and a controllable device could be the key to making family planning easier for women.

There are also further applications for implantable drug dispensers beyond female contraception. The technology could be applied to other treatments, like MicroCHIPS’ work with osteoporosis treatment. If trials prove successful, it is possible that many other drugs could be put in the wells and released periodically.

The contraceptive will be submitted for testing in 2015, and by 2018 the microchips could be on the market. The claim is that they will be “competitively priced,” making the technology a real possibility for women around the world to have a worry-free method of birth control.