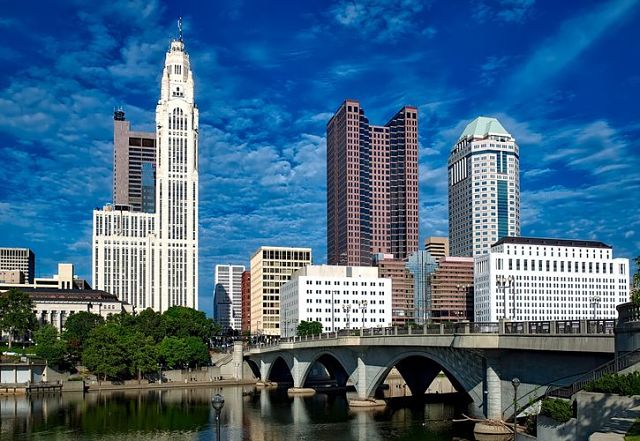 Youssef Farhat spoke energetically about his life and the experiences of refugees and immigrants in Dayton, OH, in an impeccably organized office at the University of Dayton’s Human Rights Center. The charismatic 27-year-old graduate student from Lebanon is known around campus for his personable demeanor and palpable enthusiasm.

Farhat wants to immigrate to Dayton and hopes to use his talents to contribute to the U.S. Dayton certainly wants him; the Southwest Ohio city has implemented policies that encourage the population growth of refugees and immigrants.

However, President Donald Trump’s administration has implemented reforms that have affected many of these immigrant-friendly initiatives, making it more difficult for Dayton to attract an international population.

In 2011, the city established “Welcome Dayton,” a coordinated effort among the local government, nonprofits and the private sector to transform Dayton into a “Welcome City.” The community-based initiative has achieved great success. According to its website, naturalization among Dayton’s immigrant population increased by 41 percent between 2011 and 2013.

Refugees and immigrants in Dayton come from more than 100 countries, and the city received an “Outstanding Achievement” designation from the U.S. Conference of Mayors for “Welcome Dayton.”

Dayton is not a sanctuary city, but it has historically assisted with the relocation of refugees. The city hosts a community of 2,000-3,000 Ahiska Turks who fled persecution in their homeland. Dayton Mayor Nan Whaley also signaled the city’s intent to help in the relocation of Syrian refugees in September 2015.

Despite this, things are changing. Michael Murphy, the program director of refugee resettlement for Catholic Social Services (CSS) of the Miami Valley, said there has been a 15 percent decrease in refugees directly coming to Dayton, individuals referred to as initial arrivals. For fiscal year 2018, CSS is assisting 130 initial arrivals.

This local phenomenon reflects the Trump administration’s decision to allow only 45,000 refugees to resettle in the U.S., the lowest cap in decades.

Nevertheless, Murphy also reported a 20 to 30 percent increase in secondary migrants, refugees who initially resided elsewhere in the U.S., settling in Dayton. Murphy said this shows Dayton is achieving success in creating a diverse and welcoming community.

Farhat agrees Dayton is a welcoming city but also says social changes since the 2016 election are adversely affecting refugees and immigrants in Dayton.

“Not many employers are willing to invest in the talents of international students,” Farhat said. If he doesn’t find a job, his only option is to return to Lebanon. His student visa expires after he graduates.

Though federal reforms have affected refugees and immigrants in Dayton, community organizations remain committed to supporting the burgeoning international population of Dayton by assisting new arrivals and resettled individuals and families. Through their efforts, Dayton continues to be a “Welcome City,” regardless of the presidential administration.