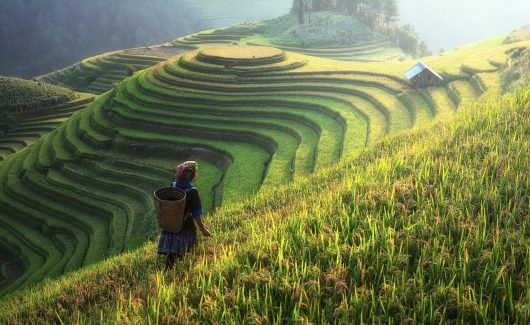 A growing population and the increased demand for food are burning problems in the present day. Many scientists, organizations, individuals and political bodies are coming forward to find solutions to this problem. Feeding so many mouths is not a simple task, but research and hard work are making the impossible at least feasible.

These are some methodical and sustainable ways of reducing poverty through agriculture and farming, especially in places with unfavorable climates, degraded soil and poor socioeconomic conditions.

Reforestation Through Cash Crops in Guatemala

Although Guatemala’s name means “a land of endless trees,” 80 percent of them were destroyed within a decade due to cattle breeding, corn farming, illegal settlements and destructive logging practices.

In order to restore the land to its previous condition, an organization named Livelihoods Funds, along with the government of Guatemala, took the initiative in reforestation by planting four million trees of various species over an area of 4,000 hectares.

Hunger, malnutrition and stunting prove detrimental to the economic advancement of any country. The Food, Agriculture, Natural Resources Policy Analysis Network (FANRPAN) came up with the initiative of helping individual farm families of Africa through nutrition-sensitive agricultural development.

Their aim is to provide technical assistance and a knowledge base for increasing food security with improved nutrition. Currently, their work is concentrated in sub-Saharan African countries, including Ethiopia, Nigeria and Tanzania.

Kenya suffers from inadequate rainfall, which affects the production of maize, the primary staple crop of most smallholder farmers. The result is that a vast population suffers from hunger and starvation.

One Acre Fund is helping the Kenyan government with reducing poverty through agriculture by planting drought-resistant crops like millet and sorghum, which act as a source of food and income during times of inadequate rainfall. The organization also trains farmers in sustainable planting techniques and fertilizer usage.

CropLife International, along with the United States Agency for International Development, is helping the people of Honduras with integrated pest management techniques. With the help of field officials, they train the farmers in good agricultural practices.

The pest management helps protect the crops and increases their quality and productivity, fetching better incomes for the farmers while improving their livelihoods. It is a powerful example of fighting extreme poverty.

In Rwanda, an organization named HarvestPlus has introduced a nutritious variety of beans through bio-fortification, a process of increasing vitamins and minerals in plants through biotechnology. The beans are rich in iron and also have the capacity to resist viruses. They are suitable for extreme climates, producing a higher yield and thus increasing the incomes of farmers.

The Feed the Future project in Cambodia is helping hatcheries raise good quality young fish known as fingerlings. The project provides cost-effective and simple technology to manage the clarity, nutrients and water quality of ponds. As a result of this technology, the growth rate and average weight of fingerlings have increased. helping individual hatcheries thrive.

The above methodologies are mainly applied in sub-Saharan and Latin American countries where there are extreme temperatures, drought and unsuitable soil. But these models can also be implemented in other parts of the world to increase the productivity of crops and meet the growing demand for food and simultaneously reducing the poverty of farmers.