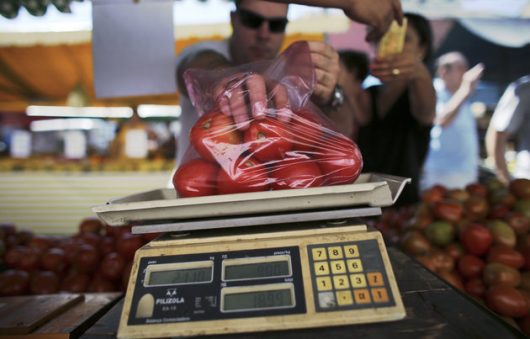 Thirty percent of agricultural products are never consumed. In response, many organizations have mobilized to help Brazil lose its infamous position as the third biggest food-wasting country, and provide relief to the 66 million suffering food insecurity.

Currently, food products in Brazil have unnecessarily short expiration dates, causing lots of good food to be thrown away. The Invisible Food Bill was proposed by Daniela Leite, Flávia Vendramin and Sergio Ignacio.

The Huffington Post explains the simple goal: “if implemented (the law) would require companies to donate food products that may have lost their commercial value, but are still suitable for consumption.” The trio hope to sell the donated items in a food truck and use the profits to raise awareness about food waste while the rest will go to charities to reduce hunger in Brazil.

The FAO was concerned by Brazil’s high food waste, and they have been combating the problem with a network of both public and private organizations. An FAO committee specialist stated that the production chain and infrastructure are to blame. Improved agriculture, shipping and storage practices would lower the 30% agricultural waste. This would save money for producers and lower prices for consumers. Unfortunately, food donation in Brazil is difficult because donors are legally accountable for recipients’ potential illnesses. A “Good Samaritan Law” is currently making its way through the legal system which would protect donors. The U.N. hopes to upgrade the processes to save money for everyone and simplify food donation.

Celebrity Chefs David Hertz and Massimo Bottura decided to put the leftovers from Olympic athlete’s meals to good use. The estimated 12 tons of food will be given to people in favelas, or low-income neighborhoods. Both chefs have experience with programs like this; Bottura founded an organization, Food for the Soul, that creates community projects similar to the Olympic program. While Hertz started Gastromotiva, which provides vocational and cooking training to empower low-income people. Volunteers have re-purposed a vacant store into a feeding station that will become a community center with cooking classes after the games. These temporary soup kitchens transformed what would have been waste to 100 hot meals a day.

These organizations are attempting to reroute food from landfills to people. Officials hope the combined effort of the U.N. and other organizations will improve agricultural production and encourage donations with bills like the Good Samaritan Law and Invisible Food Bill.