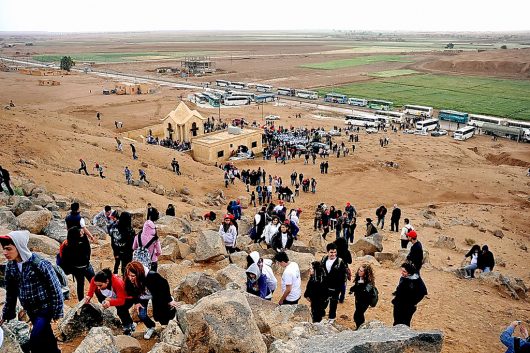 Thousands of individuals and families are returning to eastern Aleppo after months of displacement. The U.N. estimates that since the beginning of February, over 40,000 people have moved back to the area. Despite the joy of being able to return home, the war-torn city remains in ruin.

An estimated 1.8 million people in and around Aleppo lack access to clean water. The supply was cut off in the middle of January. The weather in Syria is extremely cold during this time of year, and most houses have no windows or doors. The U.N. is providing assistance in the form of sleeping mats and plastic sheets to cover open windows. Nonetheless, most remain unable to find the same comfort in their homes as they used to.

There is one beacon of hope that remains despite these horrors: the promise of education. Schools in Aleppo are gradually reopening after being destroyed by bombing. Thousands of children require remedial classes to reintegrate into the schooling system. More importantly, these students need to rebuild their confidence.

Close to half of the schools in eastern Aleppo are damaged in some way. However, the process of rebuilding is ongoing. UNICEF is playing a vital role in ensuring that children have access to education in the area. The organization is working hard to reopen and secure safe access to schools in Aleppo.

UNICEF is assessing which former schools can still be used for educational purposes. Roughly 23 primary schools have reopened since the beginning of 2017, and the number continues to grow. Prefabricated classrooms have also been set up for overflows of students who don’t have access to safe buildings.

In some areas of Aleppo, UNICEF has provided “schools in a box” and recreational kits to 90,000 children. Almost 300 teachers have received special training to help children catch up after long periods of missed education.

Children can supplement their education with classes in 70 child service spaces opened by UNICEF. The spaces allow children to play while also providing education on how to stay safe in a war-torn environment. Clinics in these spaces have taught over 60,000 people life-saving information, including how to recognize explosives.

Despite the cold and often uncomfortable conditions inside these makeshift classrooms, children are extremely excited to be getting back into a familiar routine. It is estimated that 1.7 million children in Syria are still not in school. However, the progress being made thus far provides hope that soon all returning children will have access to schools in Aleppo.