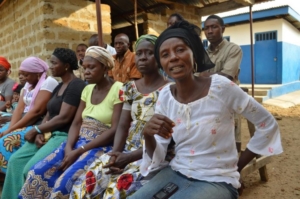 Community healing dialogues are proving effective in providing psychosocial recovery from Ebola in Sierra Leone by addressing the trauma and stigma that survivors face. These sessions give community members a forum to raise and address their concerns about problems in the community, promoting health, wellness and prosperity in both psychosocial, emotional and economic senses. The dialogues seek to erase the stigma and promote economic recovery via micro-enterprise groups.

Sierra Leone is a West African country with a population of 7.5 million. Life expectancy is approximately 52 years for women and 51 years for men. The top ten causes of death include malaria, neonatal disorders, diarrheal diseases, tuberculosis and HIV/AIDS. Sierra Leone has the highest maternal mortality rate in the world (women have a one in 17 chance of dying from pregnancy or childbirth), in addition to one of the highest mortality rates for children under five. The country lacks a centralized public health system, and most people cannot access health care due to extreme poverty.

Support and Strides Amid Ebola

Sierra Leone had the highest number of fatal Ebola cases in the 2014-2016 outbreak. The disease’s severity prompted the CDC and NGOs like Partners in Health to provide resources and support. The CDC mounted its largest ever response to an outbreak in an individual country, providing services that included:

Returning to Communities Through Healing Dialogues

Ebola is a disease with severe physical manifestations, but its social and psychological aftereffects can also be devastating and can help ensure that those affected remain in poverty. In the words of one lifelong resident of Sierra Leone, “The Ebola outbreak in West Africa had the same psychological effects on individuals as war.” Often, Ebola survivors are grieving for the deaths of their loved ones. At the same time, they face stigma and discrimination when trying to return to their communities because people fear that they still carry Ebola.

To address these complex and multifaceted issues, USAID’s Advancing Partners & Communities project introduced community healing dialogues. These meetings, which are conducted by trained facilitators, give community members space to talk through and resolve their concerns. These sessions are having positive effects on psychosocial recovery from Ebola in Sierra Leone for both survivors and their communities. Some survivors have been able to rejoin their communities free of stigma. In addition, the sessions serve as a forum for the community-based resolution of economic problems. For example, the forum led to a micro-enterprise group helping pay for a young woman’s school fee.