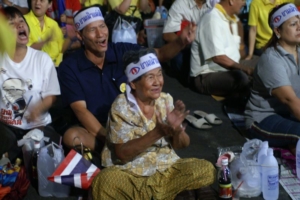 The current pandemic wave hitting Thailand has resulted in a new wave of anti-government protests in the nation. These protests are a part of a pro-democracy movement within Thailand that has been active for several years. The current demonstrations are driven by spikes in both COVID-19 and poverty.

Background on the Pro-Democracy Movement

The protests in Thailand are part of a larger pro-democracy movement that has opposed the Prime Minister’s governance since he and the military overthrew the elected government in 2014. Sentiments regarding the power of the royals in Thai society also exist. Protests right before the pandemic often had tens of thousands attending. Some believe the constitution put into place in 2014 allows for greater military control over the Thai government. The current protests in Thailand have built off of earlier protests that opposed the Prime Minister’s governance.

A recent surge in COVID-19 cases has hit the country. This has been a critical factor in the ongoing protests in Thailand. The overwhelming majority of Thailand’s COVID-19 cases are from the last few months. The Sinovac vaccine from China, which Thailand has relied on upon along with the AstraZeneca vaccine, carries concerns about lower effectiveness against the Delta variant.  More pressingly, only a relatively small portion of the country has been fully vaccinated as tens of millions of people await their turn.

The devastating impact of the pandemic on Thailand’s economy has driven many into poverty. As the outbreak of the Delta variant has rocked the country, many continue to suffer from the economic ramifications of the pandemic.  The economic shock of the pandemic on Thailand has been tremendous. Estimates show that 1.5 million Thais entered poverty in 2020 due to the pandemic. More than 8% of the country is living on less than $5.50 a day, which only contributes to the unrest felt in the country. The devastation of the tourism industry by the pandemic has been a crippling blow to the Thai economy. The industry generates tens of billions of dollars in revenue a year and is among the world’s most profitable tourist industries. In 2018, the World Bank estimated that tourism made up about 20% of Thailand’s GDP.

Vaccination rates within Thailand combined with surges in the Delta variant have made it extremely difficult for Thailand to fully reopen this critical industry. Priorities to alleviate economic pain include “[i]mprovements in employment, productivity and labour incomes, especially among the poor.” There have few “effective government schemes” to assist Thais who have lost their jobs in industries like tourism crippled by pandemic measures. Additionally, there are some indications that homelessness has skyrocketed in cities around Thailand.

The connection between growing poverty, the Delta variant and the protests in Thailand is evident when looking at protesters’ demands. At the start of August, more than a thousand protesters gathered in Bangkok. Police used “water cannon[s], tear gas and rubber bullets to stop a march toward Government House, the office of Prime Minister Prayuth Chan-Ocha.” The protesters marched with purpose; calls have risen for the Prime Minister to step down due to a lack of vaccines and jobs.

The pandemic has forced many Thais into poverty, and many have lost their homes and incomes. In addition, critical industries such as tourism have been frozen due to the pandemic, depriving Thailand of revenue and jobs. The recent surge in the Delta variant is made worse by the lack of effective vaccines in the country. In response, Thais are taking to the streets to demand the Prime Minister step down due to his mishandling of the twin crises of poverty and COVID-19.