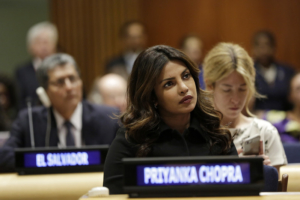 Priyanka Chopra’s activism in Kenya sparked interest on social media, where the actress documented her trip and appealed to her followers to support UNICEF’s efforts against Kenya’s hunger crisis. The “Matrix Resurrections” star is an established goodwill ambassador of UNICEF and has traveled to the country to help its children and people to obtain the funds and resources for food and other basic necessities.

What is Happening in Kenya

Kenya is currently experiencing the worst drought in 40 years. Four consecutive seasons of inadequate rain have plagued areas of the country.

In addition, it is estimated that nearly 900,000 children under the age of 5 suffer from life-threatening severe acute malnutrition and are in need of treatment. To help drought-affected families in the Horn of Africa, UNICEF provides emergency WASH kits and rehabilitates and upgrades non-functional boreholes in schools, villages, and health centers.

Besides, with the support of UNICEF and USAID, the Ministry of Health and the Kenya Red Cross Society conducted an outreach clinic to assess children under 5 for malnutrition and immunize them.

Since the shortage of supply – one of the longest and most severe in recent history – is said to persist into the forthcoming year, humanitarians are urging greater support to prevent famine in the Horn of Africa. At the same time, they must prepare to continue their life-saving work in Ethiopia, Kenya and Somalia.

Priyanka Chopra’s activism in Kenya included a trip to Turkana County, one of the 15 areas affected by the droughts caused by the COVID-19 pandemic, where one out of three children suffers from severe malnutrition.

“In the Horn of Africa children are starving to death and millions more are on the brink of starvation right now. Most of the families I met are living on less than $1 a day, and some had not eaten for three days,” Chopra said to UNICEF. “UNICEF’s life-saving efforts on the ground are helping to curb this hunger crisis, which includes distribution of nutrient-packed therapeutic foods that can save a child’s life,” continued Chopra.

As part of her visit, the actress spoke with members of the Sopel Village community suffering from the drought, including some who have migrated for water and pasture for their animals. Now that a solar-powered borehole has been constructed in Sopel, residents and students at the local health facility and primary school have reliable and safe access to water, UNICEF reports.

The actress has also documented her visit to the Lodwar Pediatric Stabilization Center where health workers treat most severe cases of malnutrition in children. In her post, Chopra said she hoped she would never have to do such a thing again but knows she will and encouraged her followers to donate to help solve the crisis.

The videos of encouragement and report shared on her Instagram pages have gained reactions from hundreds of thousands of individuals, raising awareness of the harsh situation that Kenya and its people are currently going through.

Following the birth of her first child, the celebrity said that this situation affected her differently. “What I especially saw when I went to the Ghana region was that it was very difficult for me especially as a new mother to see so many children suffering the way they were,” said Chopra. “To see those women standing by their children and not eating for days to make sure their children eat just goes to show that there is so much strength in human beings and especially in women,” she added.

Priyanka Chopra’s activism in Kenya comes immediately after another of her humanitarian works. The Matrix Resurrection star has recently made the news for her support of Iranian women who have been protesting the death of 22-year-old Mahsa Amini, praising their courage in fighting to defend their rights, Outlook India reports.

Priyanka Chopra’s activism in Kenya is a source of hope, as demonstrated on her Instagram account, where the actress has expressed faith that, with the money, resources, and help required, Kenya will see a better future. “What you think is small, is the small that I don’t have,” the actress wrote quoting a teacher struggling to fund the school he runs in Sopel village with UNICEF. She concluded her post by encouraging the public to donate.