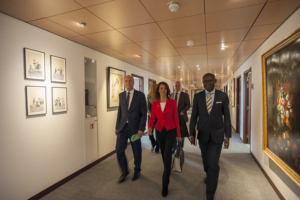 Princess Marie of Denmark completes her tenth year working with DanChurchAid, an organization working to combat global poverty. She has also contributed to several other philanthropic organizations over the years. Her Royal Highness actively advocates for the critical cause of diminishing global poverty through her work and commitment.

DanChurchAid is an organization that works with economically developing nations to combat hunger, poverty, and oppression. It has been operating for over a hundred years, and with the help of donors, volunteers, and partners, it has aided people in more than 120 countries. The group uses popular and political forces to urge political decision-makers to improve living conditions for the underprivileged. Along with their long-term aid in low- and middle-income countries (LMICs), the organization offers relief to disaster-stricken areas. They make sure that communities reemerge more robustly, and are more adequately prepared if disaster strikes again. The group’s mission emphasizes the importance of human rights as well as working with those in need on relevant, sustainable, and practical projects.

Through her years as a patron, Princess Marie’s philanthropy has shown through her multiple humanitarian trips with DanChurchAid. During a recent trip to Uganda, she visited the Raising Gabdho Foundation in Kampala. There, she learned more about the foundation’s work, and the techniques they developed to cook in a more sustainable way. She also saw a DanChurchAid project called Fresh Fruit Nexus. The Danish International Development Agency first developed this project in Northern Uganda in 2018. Here, Princess Marie visited Ugandan farmers in the Omugo Refugee Settlement. Together with their refugee families, the farmers formed a cooperative in which they collected crops together and had the opportunity to borrow money from each other.

Princess Marie’s philanthropy extends to other countries as well. She has also traveled to Myanmar in the past. In Myanmar, DanChurchAid has provided underdeveloped communities with practical tools to advance their economic status and quality of life. People have worked to financially organize themselves through savings and loan systems. The underprivileged community could use the money to purchase essential tools, such as sewing machines, for economic sustainability. Princess Marie made this humanitarian trip alongside Danish donors who are also passionate about combating global poverty.

Another project that Princess Marie was active in is a supermarket called Wefood, which is located in the capital of Copenhagen, Denmark. Her Royal Highness worked with DanChurchAid in unveiling the project. Wefood aims to promote sustainability and accessibility by collecting surplus produce daily and selling it. By using this method, they can cut costs by 30 to 50%. The supermarket has aimed to cut back on food waste and provide food to those affected by poverty. This is the first of its kind in the nation.

In addition to Wefood, Princess Marie has also worked with FoedevareBanken, a Danish food bank. This organization also aims to fight food waste and poverty. Similar to Wefood, they work to provide disadvantaged people with sustainable food, and this initiative ensures that all people can have access to nutritious and balanced meals.

Through her advocacy and patronage with DanChurchAid, Princess Marie has effectively influenced the fight against global poverty. After her ten years with the organization, people worldwide eagerly await to see where Princess Marie’s philanthropy will inspire change next.