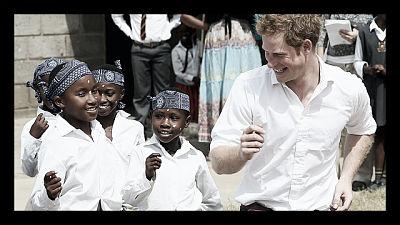 Following in the footsteps of his mother, Princess Diana, Prince Harry has never been a stranger to charity trips to Africa. After a four and a half month tour of duty in Afghanistan, Prince Harry began his visit to South Africa and Lesotho on Wednesday. His itinerary includes dinners, fundraisers, site visits, and catching up with his charity Sentebale in Lesotho.

One of his stops early yesterday was at the Kanaelo Center for the Deaf in Maseru, the capital of Lesotho. The school is one of only two schools for the deaf. Here, the Prince spent time in the classrooms learning sign language from the children and also got a chance to express his inner domestic-side in the school’s kitchen.

The Kanaelo Center is one of the many projects that is funded by Sentebale. Meaning ‘forget me not’ in the country’s native language Sesotho, the charity was founded in 2006 by Prince Harry and Prince Seeiso of Lesotho. It focuses on health and educational assistance to the country’s half a million orphans and children who suffer from HIV/AIDS, physical and mental disabilities, and other ailments.

His next appearance was at the St. Bernadette’s Resource Center which works with blind children. Here, he simply spent time with the children, interacting with them, and getting to know the projects of his charity more directly.

The main purpose of the trip was the Sentebale Gala Dinner which took place Wednesday night in Johannesburg, South Africa. A vital aspect of running a big charity are these sometimes extravagant dinners and events which in reality are what help bring in interested people, and more importantly their wallets, to donate to the cause. All the money from this event will go specifically towards building a new home and education center, The Mamohato Center. The center will provide the services that the Mamohato Program did but in a more permanent setting. The Programme emphasized educating children with HIV/AIDS on not only the basics of health but also about the disease they are living with in order to spread awareness throughout their communities. The center will also provide psychological services as well as mentoring.

In the late 1990s before her death, Princess Diana was constantly in the news for her humanitarian work and immersion with impoverished communities. Aside from the celebrity aura of the royal family, the fact is that their money and status also come with an incredible amount of power. Truthfully, they create more excitement than a Hollywood starlet’s newest foreign adoption. Being third in line for the throne, it’s important for Harry to constantly remind himself of the work outside of the United Kingdom and modern work that needs to be done to increase the well being of children living in poverty; work that he has not only the power but the passion, to do.