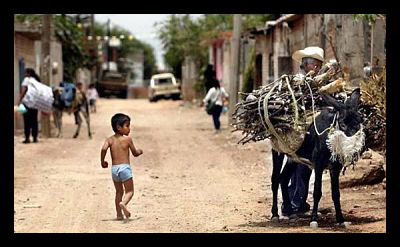 In Mexico, 25.3 million people are without access to proper health care, and 27.4 million people do not have proper access to food and are described as being food insecure. Food insecure is a term that is used in Mexico to describe those who face extreme hunger and are unable to meet their own nutritional needs during the year. Despite a decrease in extreme poverty since 2010, poverty has continued to increase.

Mexico City is the capital of Mexico and has a population of two million people. It is a city that struggles with disease and poverty. The wealth in Mexico City is concentrated. Although some of the poor live in the cities, many reside in the rural areas. The rural areas house the majority of the impoverished; however, there is little recorded data to demonstrate the cause, according to the government. Although the government is aware of the poverty that exist in these areas, the states of Mexico that border the United States do not qualify for the Oportunidades program to alleviate poverty and health issues.

The first Millennium Goal initiatives are applicable to the status quo of Mexico City. With little aid from the government, Mexico City will have to look to outside sources for relief.

What Are the Impacts of Microfinance, Really? Freedom from Hunger Dedicated to Ending World Hunger
Scroll to top