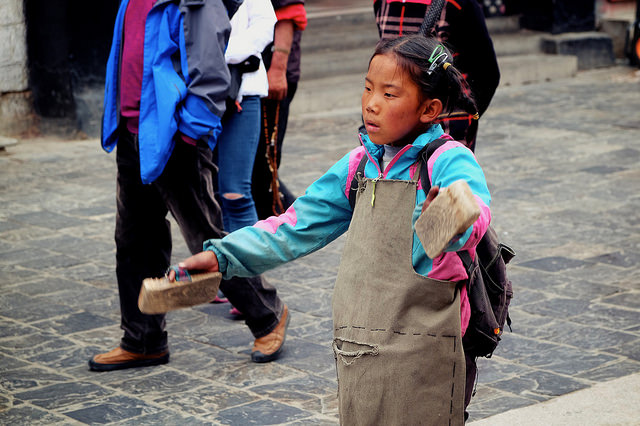 Despite political tensions, Tibet has seen marked improvements in everyday life for its average citizens. The central government in Beijing and other nations may have ulterior motives behind their funding, but the result is the same: a more prosperous Tibet. Aid is flowing in from the Chinese government, the United Nations Development Project (UNDP) and Nepal, to name a few.

According to the regional authority, over the course of the past five years, over 530,000 people have escaped poverty in Tibet. It comes as no surprise that with a falling poverty rate, there is a rise in registered capital. Currently, the number stands at over $162 billion, a 39.4 percent increase from the previous year.

Tibet and China have been in a tense struggle over Tibet’s autonomy since the 1950s. Many Tibetans wish for independence, and in the past, the Chinese government has acted forcefully.

The most notable example of this is the situation with the current Dalai Lama who has been living in exile in India since the Tibetan Rebellion. Despite the Dalai Lama’s tension with Beijing, it seems even he believes that remaining with China is in Tibet’s best interest. Couple that with the many development projects China has enacted in Tibet, and it appears that their relationship is looking up.

The government in Beijing gives the impression that its best path to quieting Tibetan independence talks is to tackle the region’s poverty problem. One such project that China has funded is in Amdo County, where once-nomadic herders who lived in adobe huts are now receiving homes paid for by the government with a market rate of approximately $47,000.

The Shopko family, one of the recipients of these homes, have gone on the record to express their heartfelt thanks for their new home. Their old hut sat at 16,000 feet with no heating or roads to connect them to the nearby villages.

To help with the move, the Chinese government is giving migrants jobs at local tourism centers, hotels and car washes. It follows up on this guarantee with monthly bonuses for locals who manage and protect the essential grasslands, as well as 5,000 yuan a year to residents who enroll in university.

Foreign countries are investing in Tibet as well. The Nepalese government has been distancing itself from its neighbor, India, in favor of China. This political posturing could be for a host of reasons; however, the projects Nepal is planning in Tibet are apolitical for the Tibetan people.

Gobinda Karkee is a Nepalese diplomat who oversees development projects with China. The most famous of these is the Friendship Bridge, which was renovated in 2016. The plans are not all symbolic, though. By 2020, Nepal plans on finishing a rail network that will connect with Tibet and lessen its reliance on using Indian ports. The $226 million project is jointly funded by Nepal and China. Along this rail line will be multiple trading points and border checks. The two nations hope the plan will boost the local economy and help rebuild much of the infrastructure that was destroyed in the 2015 earthquake.

Poverty in Tibet has often gone unnoticed in the media because when the region is in the news, it is being celebrated for its rich culture and history. The UNDP sought to take advantage of this by building tourism infrastructure in rural areas, which in turn provides higher paying jobs for the impoverished people in the Tibetan Steppe.

Much like the Chinese government’s program, UNDP has put a heavy focus on preserving the local ecology and economy. The bulk of the project focuses on Old Lhasa City. The city is famous for its courtyards, which UNDP is mapping, landscaping and organizing the foundation of to make Lhasa a tourist destination. Old Lhasa has become an exemplary case of the economic and cultural benefits of the UNDP program.

Tibet rests in a political hotbed in South Asia, and the effects of the decisions made by its neighbors can have unintended consequences on the proud region. Throughout the religious and diplomatic dilemmas, poverty in Tibet has long been a debilitating issue. Thanks to organizations like the UNDP, this problem is now being dealt with and has already improved the lives of half a million people.