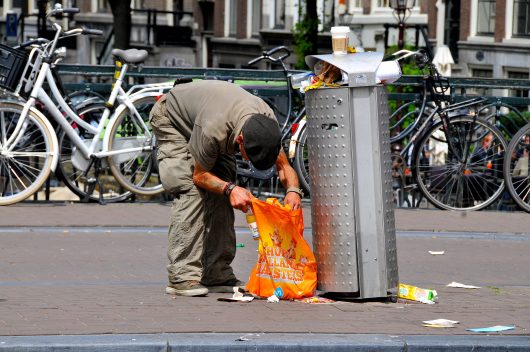 Poverty in the Netherlands? Pockets of poverty still exist.

Poverty in the Netherlands: Implications and Solutions

The poverty line for the Netherlands is drawn at approximately €1,040 a month for a single individual and up to €1,960 for a couple with two children. These figures calculate to $1,174 up to $2,213 and they are considered the bare minimum necessary to eat, live and partake in social activities in the Netherlands.

Some 217,000 Dutch households were found, in 2014, to have lived on or below the poverty line for at least four consecutive years, indicating a lack of support from the Netherland’s government to help its less fortunate citizens since the worldwide economic crash of 2008.

Those family units most likely to land below the poverty line in the Netherlands are single parents, singles over the age of 65, non-Western households and anyone living solely on social assistance benefits, all of whose poverty rates have risen dramatically since 2012.

To help single parents below the poverty line, the Dutch government affected the Child-Care Schemes Reform Act in 2015. The act provides income specifically for a child or children based on the parent’s income to help offset the considerable cost of rearing children. Netherland’s government will also award double the amount of financial aid to parents of severely disabled children who require round-the-clock care.