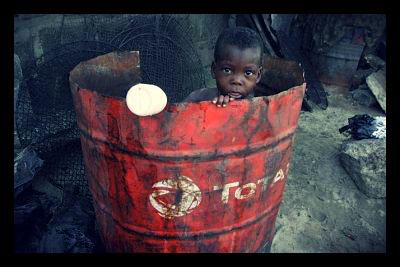 Poverty in Nigeria? Steady GDP growth, a thriving agricultural sector and a booming oil industry should be raising the quality of life of poor Nigerians. But, political instability and widespread corruption is undermining economic progress and widening the inequality gap. With a population of more than 165 million people, Nigeria has one of Africa’s fastest growing economies. Strong exports—including petroleum, cocoa and rubber—and increasing foreign investments have all contributed to the country’s growing GDP, which was 262 billion in 2012. The country’s GDP has grown by an average of 7% each year over the past decade.

Despite these promising figures, Nigeria remains one of the poorest countries in the world. In 2010, 69% of citizens were living below the national poverty line. Almost 100 million people currently live on less than $1 a day. There are many consequences of extreme poverty, many of which are crippling Nigeria today. These consequences include lack of access to basic services like healthcare, adequate nutrition, clean water, education and job opportunities. Access to healthcare is also a major problem in Nigeria. Poor healthcare has contributed to the country’s high infant mortality rate and the spread of preventable diseases. The infant mortality rate is 88.4 for every 1,000 live births and 142 children out of every 1,000 will die before the age of five.

Malnutrition is widespread in Nigeria and food shortages are common. Nationally, 41% of children have stunted growth and 23 percent are underweight. In rural areas, 44 percent of households cannot meet their family’s basic food needs. It is estimated that nearly 10 million children don’t attend school in Nigeria. This means that 42% of the school-going population is not enrolled in a school of any kind. Not attending school as a child limits job opportunities later in life and is one of the main reasons behind illiteracy. Only 61% of citizens are literate. The majority of illiterate individuals are women living in rural areas.

Unemployment is also an increasing concern and a major contributor to poverty in Nigeria. The unemployment rate was 24% in 2011, up from 21 percent in 2010. Unemployment has hit young people the hardest; about 38% of people aged 15 to 44 don’t have jobs.

But, poverty is especially severe in the rural areas. An estimated 80% of the country’s rural population lives below the poverty line. This means there are more than 50 million rural poor. Agriculture is the main source of income for 90 percent of the rural population. But a growing population and environmental issues put a great deal of pressure on these people. As resources diminish, food cultivation is being made even more difficult by land degradation, drought and erosion.

Across Nigeria, urban poverty is a major issue as well. More than 50% of citizens live in urban areas and six cities have populations of 1 million or more.  Approximately 70% of the urban population live in slums or rudimentary housing. Furthermore, migration from rural areas to urban areas is increasing, putting even more pressure on the weak infrastructure that exists in many Nigerian cities. There are many theories behind poverty in Nigeria, the majority of which are political. The country adopted civilian rule in 1999 and various religious and ethnic groups have been struggling to gain political influence ever since. Separatist groups like Al-Qaeda ally Boko Haram have caused widespread instability throughout the country, waging violent campaigns and terrorist attacks throughout the country. This instability only exacerbates poverty in the country even further.

Corruption, especially concerning the country’s oil industry, has significantly increased the economic inequality gap. Nigeria is Africa’s leading oil producer, yet few citizens have benefited from the trade. The majority of the money is divided between politicians and wealthy oil executives and fighting over control of oil fields is causing increasing instability in the Niger Delta.

Nigeria has the natural resources and foreign investments needed to raise the standard of living, but widespread instability and corruption is driving many people even further into poverty.