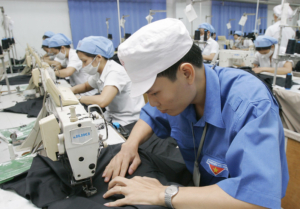 Between wars, famines, communist regimes and poverty, Vietnam has had its share of troubles. In 1992, 52% of Vietnam’s population was in poverty, but things have changed for the better. Vietnam has been able to bounce back from its difficulties and is now one of the fastest-growing economies in the world. In 2018, less than 2% of Vietnam’s population was in poverty. Poverty eradication in Vietnam has been successful because of its strong production, widespread infrastructure and growing middle class.

Vietnam has had many economic troubles in the past. One of its major problems was its reliance on agriculture as a source of income. In 1991, around 40% of Vietnam’s GDP was agriculture.

Growing crops simply did not pay enough to support Vietnamese families. Many impoverished farmers solely relied on agriculture to provide for their families. Vietnam was not doing anything to diversify its economy into more promising markets. While countries like China and Japan were building factories and manufacturing cars, Vietnam was growing rice. Once Vietnam started to invest in more profitable industries, its GDP skyrocketed. Vietnam’s real GDP growth rate was 7% in 2019, far higher than any other in the region. In 2020, around 34% of Vietnam’s GDP comes from industry markets.

Some of its main exports include electronics, footwear and textiles. This has provided life-changing opportunities for millions of Vietnamese families. Many of these poor families are now moving to major cities to work in factories and earning higher wages. Poverty eradication in Vietnam has been largely successful due to its strong and diverse economy.

A large percentage of Vietnam’s population lives in rural areas surrounded by mountain ranges. Previously, most of these people grew simple crops like rice. This was not enough to improve their poor living conditions and many of these people went hungry. The Vietnamese government has sought to dramatically increase the amount of infrastructure in order to connect these rural villages to the rest of the population. In 1993, 14% of the population used electricity as their main source of lighting. This rose to 99% as of 2016. Meanwhile, in 1993, only 17% of rural areas had access to clean water. Now, more than 70% have access to this essential service. These mountain villages are now in contact with the rest of the Vietnamese population. This has provided valuable opportunities for these poor families that they have never had access to before.

Now that many of these rural villages are connected, people are starting to move out of poverty and into a growing middle class. Major cities such as Hanoi and Ho Chi Minh City are growing as people look for more opportunities. Higher wages and increased standard of living have lured many rural families into moving to the city. Thirteen percent of Vietnam’s population is part of the middle class, and middle-class numbers are continuing to climb. On average, 1.5 million Vietnamese join the middle class every year. What makes this even better is that very few of these people fall back into poverty. From 2014 to 2016, only 2% of Vietnamese who moved out of poverty fell back into it. Poverty eradication in Vietnam is not only successful but sustainable as well.

Despite numerous hardships, Vietnam has been able to go against the odds and become one of the fastest-growing countries in the world. In the late 1900s, Vietnam was in a dismal state. More than half of its population was in poverty. However, by entering the global economy, expanding its infrastructure and creating a strong middle class, poverty eradication in Vietnam is unprecedented in its success. Many hope that Vietnam will continue this success in the future.