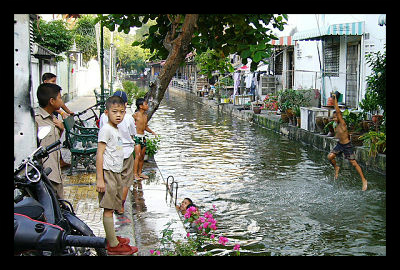 As of 2013, there are an estimated 7.3 million people that are considered to be in poverty in Thailand, according to the World Bank.

Lack of opportunities, education and income inequality have been major contributors to the cause of such high poverty numbers. Although it is claimed the number of the poor has decreased in recent years, the rate overall remains consistently high.

Basic needs are not the biggest problem that families face. It is that the difference between the income of the lower and upper classes is increasing. Thirty percent of the population possess the wealth, most of which was obtained in the 1980s and 1990s. However, the earning capacity of the remaining 70 percent remains relatively low.

Beginning in 1997 and lasting throughout 1998, what is commonly referred to as the “Asian Crisis” took place. Prior to this, Thailand was experiencing an abundance of economic growth. In 2011, a flood occurred just after the global financial crisis of 2008. From 2013 to 2015, political turmoil further contributed to the problem. Since then there has been less and less global demand for Thailand’s chief exports, such as shrimp. Currently, growth is predicted to increase this year at 3.5 percent.

The Millennium Developmental Goals can be reached in Thailand on an aggregate basis. The rates of maternal and under-five mortality rates have decreased. Efforts have also been made to increase access to clean water and sanitation in urban and rural areas alike. The biggest concern is environmental sustainability. There is a need to make more employment opportunities available to those in rural areas. In addition, educational resources for parents to assist their children or micro-enterprise business opportunities need to be made available.

At its worst, the top 20 percent earned 15.8 times more in contrast to the lowest 20 percent. At times, the average income is found in the most impoverished region in the northeast; it has been recorded as being 11.9 times lower than Bangkok. This has driven rural workers to seek work in urban areas like Bangkok. It is a contributing factor to the slum areas in cities. Bangkok is considered a concentration of economic activity, services and goods. This is evident given that 50 percent of Thailand’s GDP is from Bangkok.

An additional reason for poverty is the government’s lack of responsibility during its financial and industrial reforms. During these times there has been a lack of social services implemented. Another reason stems from the failure of the Thai government to provide social safety nets amid the country’s rapid growth and industrialization.

Since the 1990s the government in Thailand has embraced the MDGs. It has adopted more aggressive methods in confronting the root problems of poverty and income gaps. In addition, programs to utilize rural workers have been developed. As the Sustainable Development Goals and the Post-2015 development agenda near, and will eventually replace and advance the progress of the MDGs, Thailand and other countries will have the opportunity for renewed efforts to combat poverty and inequality.