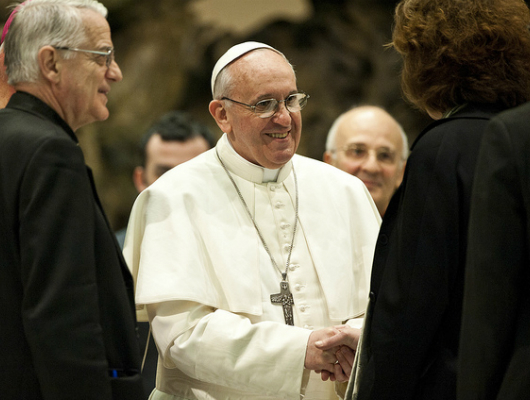 The ceremony included 15 refugees along with friends and staff of the Jesuit Refugee Service (JRS). Pope Francis stressed the importance of education for refugee children and youth in order to build peace and improve societies. “To give a child a seat at school is the finest gift you can give,” said the Pope.

Pope Francis has formally recognized and pledged support for the JRS Global Education Initiative to increase the number of refugees served by JRS’s educational program by 100,000 by the year 2020.

“Your initiative of ‘Global Education’ with its motto ‘Mercy in Motion,’ will help you reach many other students who urgently need education which can keep them safe,” Pope Francis said.

Today there are more than 60 million people who have had to flee their homes.

The Initiative helps refugees overcome barriers to education such as overcrowding in schools and being accepted into host communities. Education can keep children safe from gender-based violence, child labor and early marriage. It can also prevent them from joining armed groups.

Only 36 percent of refugee children attend secondary school and less than 1 percent have the opportunity to pursue higher education.

“For children forced to emigrate, schools are places of freedom… Education affords young refugees a way to discover their true calling and to develop their potential,” said the Pope.

JRS works in 45 countries and 10 different regions across all faiths and nationalities to help the most vulnerable in the hardest to reach areas.

According to Independent Catholic News, JRS was founded in 1980 by the Superior General of the Society of Jesus to meet both the human and spiritual needs of refugees. JRS is currently focused on helping refugees from Syria, Afghanistan, the Central African Republic and the Eastern part of the Democratic Republic of Congo.

JRS is continuing to grow and expand in order to accommodate for refugee children and their need for education.