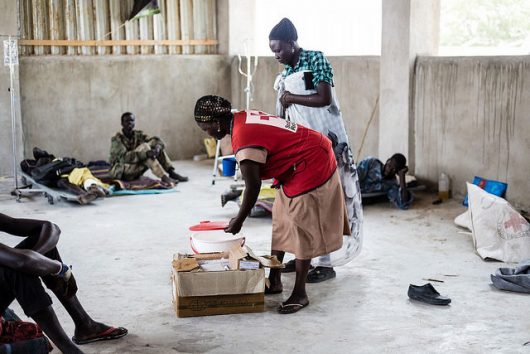 “Pure science is not pure anymore; if it ever was,” says former U.S. diplomat Judith Kaufmann. The Borgen Project recently had the opportunity to attend a lecture given by Kaufman where she discussed her views on the politics and diplomacy of global health. She spoke of global health issues and how they have evolved, and analyzed multiple examples of these issues in recent years. She had one overall message: “Every skill is needed, and everyone can make an impact.”

Kaufmann graduated from Miami University in 1969 with a degree in Political Science. In her own words, she says she was “backed into public health.” She had no prior experience in these fields, but she had been a foreign service officer and knew how to interact within and between countries. When she was hired in the field of public health, she learned what was necessary about each health issue to craft proper policy.

She was told, “you can’t always teach doctors diplomacy.” She went on to work for the State Department, the Global Fund to Fight AIDS, Tuberculosis and Malaria, the World Health Organization; she now acts as an independent consultant for groups like the Bill and Melinda Gates Foundation.

Kaufmann gave several examples of how multiple disciplines and skill sets have been required to tackle issues involving global health. The first instance involves the Nigerian polio vaccine boycott. In 2003, states in Northern Nigeria boycotted the polio vaccine introduced to the area by the World Health Organization that resulted in a resurgence of the disease.

WHO did this due to a lack of trust in the organization caused by divisions within the Islamic community and between the North and South. According to Kaufmann, the WHO believed “Nigeria would be easy,” and waited until later in the campaign to target the country because it didn’t factor in the Nigerian history of conflict and division.

Kaufmann believes this could have been prevented if there had been someone involved in the vaccination campaign actually familiar with the culture of the region.

Another example she gave involving the politics and diplomacy of global health occurred within the United States. She describes how the second Bush administration used politics to gain funding for the emergency plan for HIV/AIDS relief.

The President continued his campaign strategy of “compassionate conservatism,” but what really gained support for the program, in Kaufmann’s opinion, was his choice to frame the issue as a matter of national security. According to Kaufmann, “he realized you have to appeal to emotion and rationale.”

In Kaufman’s view, the politics and diplomacy of global health will only continue to grow in complexity. As an example, she cites China’s “New Silk Road” project and the health impacts on the multiple countries it passes through, and that these must be addressed by the World Health Organization in order for the project to move forward.

She also addressed the problem with U.S. apathy towards global health. In her words, “support for global health has flatlined in the United States.” Her hope is that the youth continue to care about and give their skills to addressing global health because “the problems have gotten too big and global health is too complex to be left only to doctors.”