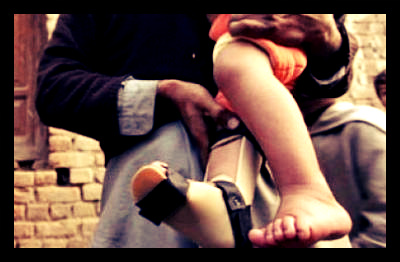 The World Health Organization (WHO) recently announced a high number of polio cases are concentrated in Pakistan’s city, Peshawar. Afghanistan, Nigeria and Pakistan are the only countries that remain on the polio endemic list. Despite various vaccination campaigns on children, the disease has not been eliminated. The efforts by several organizations are constantly curtailed by the deaths of vaccinators and police officers.

Pakistani Taliban militants are said to be responsible for these attacks and continue to ban vaccinators in North and South Waziristan, undermining government efforts to eliminate the virus.

Most of the cases of polio in Pakistan have been linked to Peshawar, including all 12 cases found in the neighboring country, Afghanistan. In 2012, Pakistan reported 58 polio cases but this number has increased to 91 this past year. There is an explanation to why this genetic link of polio has origins in Peshawar.

Approximately 65 of these cases in 2013 were from remote tribal regions of Pakistan, but due to fighting, thousands of families migrated and sought refuge in the city of Peshawar. Now Peshawar is the site of infection; Afghans who travel into the city take the disease back to their country.

On January 22, six policemen and a boy were killed by a bomb meant to detonate on a polio vaccination team. On January 21, gunmen were behind another wave of violence that killed a medical team. Militants are seeking to terrorize health workers so they abandon the polio campaigns similar to events in 2012, where two United Nations workers were killed by the Taliban and programs were suspended.

Nobody is certain about who is leading these attacks but some suspect the work of militant Islamists because of their strong presence in the northwestern areas of the country.

The WHO has worked diligently to stop this disease from spreading. The Pakistani government has also mandated test samples of the sewage water from Peshawar and other major cities. Several children are at risk of contracting this disease that can potentially paralyze or kill, so several organizations are pressuring the government for more vaccination campaigns.

These past months, each test conducted in the sewage line has indicated the presence of the polio virus in Peshawar. Due to tensions in the northwest with militants who believe vaccination campaigns are meant to sterilize Muslim children, health workers were unable to reach all of the children in North and South Waziristan. About 260,000 children were not given vaccinations last year and because they mostly live in unsanitary conditions, there could possibly be another surge if immunization programs continue to be obtructed by militants.

An Open Letter: North Korea to the South Deforestation Linked to Drug Smuggling?
Scroll to top